The Ultimate Stuntman NES Game Cartridge
The Ultimate Stuntman was released for the NES in 1990. Codemasters developed the game and Camerica published it. It is 1 of the 14 games that Camerica published without the proper licensing. The company was forced to make cartridges for themselves that bypassed the lock out chip that Nintendo had and break their 10NES code. Practically all of the games Camerica published will have a switch that is found on the cartridge’s reverse side, allowing a person to switch to PAL or NTSC compatibility.
The player will take control of Ultimate Stuntman, who is the rogue mercenary that was called for duty when Dr Evil suddenly kidnapped Jenny Aykroyd. The game will follow the footsteps of games like Mega Man and Contra, giving the player the access of playing various levels having different concepts. The game’s basic recurring theme will be three levels, the boss fight, then the bomb disposal. The majority of these cases will have a sequence’s first level involve the player chasing Dr Evil inside some type of vehicle like a dune buggy, hang glider, car, etc. The game’s second series will have the player fighting enemies on foot and be equipped with a firearm.
The game’s third level series will use the concept of the player controlling Stuntman who will need to climb up a structure, which is similar to the gameplay of Crazy Climber. Simultaneously, however, the player will act as the Stuntman’s sniper aid by shooting the creatures and objects down that threatens him while ascending. During those levels, one action only can be done at any time, so the player can snipe the enemies or move Stuntman. Once the boss is defeated, a player will need to dispose a bomb before its fuse is burnt entirely. The player will need to use the D-Pad to move a cursor to every block while keeping track on a number that is on every block. When the cursor is moved onto a specific block, it’s number will be decreased by one, thus creating a scenario that is puzzle like. If a player messes up, they will need to have the disposal reset and attempt again, but with less time to accomplish. A player will not be able to advance the game until the complete a bomb disposal within the given time.
UPC: 0-69667-07400-7
Platform: NES
Players: 1
Condition: Used
Genre: Action and Adventure
Region: NTSC (North America)
Rating: Everyone 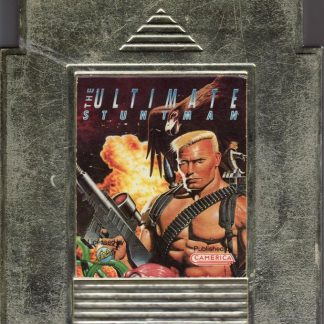 You're viewing: The Ultimate Stuntman NES $29.99
Add to cart