Ultimate Basketball NES Game Cartridge
Ultimate Basketball was released for the NES in 1990. It was developed by Aicom and published by American Sammy. This game has no relation to Amiga’s game with the same name.
The game will play like a sports game that is conventional. A player will choose from 7 different teams. The teams available are the New York Powers, the Los Angeles Eagles, the Detroit Unions, the Chicago Wolves, the San Diego Dolphins, the Dallas Fighters, and the Houston Comets. All five players are able to be controlled, but only one player at a time is capable of being controlled directly. The two modes available are single game and championship mode.
Unlike the later sports video games, Ultimate Basketball does not use actual college or professional basketball players. The basketball players a player is able to select for their team are all fictional, and their statistics are also fictional. The game had a possibility of so many basketball players fouling out that there would only be a few of them left on the court by time a game ended.
UPC: 0-39471-88508-3
Platform: NES
Players: 1-2
Condition: Used
Genre: Sports
Region: NTSC (North America)
Rating: Everyone 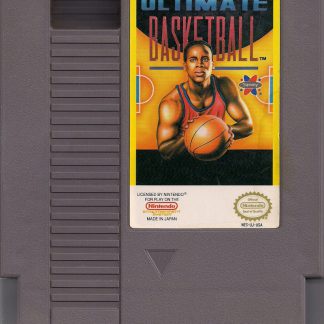