Wizards and Warriors III NES Game Cartridge
Wizards and Warriors III: Kuros: Visions of Power was released for the NES in 1992. Zippo Games developed the game and Acclaim published it. It is Wizards and Warriors’ third installment in the series, and was also the last. It is a direct sequel to the second installment Ironsword, with the game picking up right at Ironsword’s end where Kuros, the knight warrior, defeated Malkil, an evil wizard, on IceFire Mountain. The game will be nonlinear and will require the player to explore a variety of areas to obtain items and abilities to be able to unlock the different parts inside the city so they can progress. The inspiration for the gameplay for the third game came from other NES games like Faxanadu, Super Mario Bros 3, and Metroid.
When the game starts, it will be right when Malkil was defeated from the second game. Kuros, however, was unaware that the spirit of Malkil survived, and then the spirit struck Kuros with a magic bolt. The bolt knocked Kuros out and removed all his armor, honor, and memory. The weakened Malkil flees and goes into hiding inside of Piedup, a peaceful city. Good King James is then dethroned and Malkil takes over the city. While this was happening, Kuros was left wandering in the wilderness, having no armor, weapons, or food. After several months of wandering, he eventually arrives at Piedup where the spirit of Malkil is residing. While in Piedup, Kuros assumes a few disguises that included a thief, knight, and wizard. He used these to travel inside Piedup without being detected so he could build his skill and strength, rescue some damsels, and prepare to battle Malkil once again.
The game, like the past two titles, will be a platformer and will feature gameplay elements that are open ended, similar to Faxanadu and Metroid. The player will take control of Kuros and begin the journey of defeating Malkil and rescuing Piedup. There will be three different realms the player will need to explore, which will be the town, underworld, and palace. The realms are able to be freely navigated from one to another. During the game, the player will find money that they can use to buy the items from the inns that are located around Piedup. The items available to buy are keys that unlock doors, drink and food to restore health, and information a shopkeeper will provide. The game will start the player out having three lives. When all three lives are lost, the game will end. Unlike the past two titles in the series, however, there will be no continues or passwords.
The player’s first objective is gaining new powers, abilities, and disguises from the three classes. These classes are a wizard, a thief, and a knight. For the player to accomplish this, they will need to collect a bronze statue, a silver statue, and a gold statue for every class. Once the statues are found, they will need to return the statues to their corresponding guild. When a statue is returned, the player will be given a test from the guild master and the player will need to pass the test. This test will be a vertical or horizontal scrolling level that will have a boss at the end. When the boss is defeated, the player will be given a new ability and attire.
Every class will have three levels, with each corresponding to a certain statue that the player will need to return to a certain guild. An example will be if the player obtains the bronze statue for the thief class, they will need to take it back to the thief guild’s first level. Once the player passes the test, they will receive a new ability and disguise of a thief at level one. As the guild levels increase, the tests will become more difficult. Every new ability will allow the player to access different areas that were previously unreachable with the other character abilities and classes. The new abilities will include improved knight weaponry, greater wizard magic, and an increase to building access through windows and doors for the thief.
Another objective the player will need to do for finding Malkil and defeating him will be to find four secret gems that will unlock a hidden passage that will go through town and lead to the throne inside the castle where Malkil is located. In order for the player to accomplish this, they will need to rescue the three princesses of King James that are hidden within Piedup. Each princess will grant the player one gem and then agree to marry Kuros when they are rescued. The fourth and final gem will be obtained after defeating the dragon that resides in the underworld.
UPC:0-21481-10504-6
Platform: NES
Players: 1
Condition: Used
Genre: Platformer
Region: NTSC (North America)
Rating: Everyone 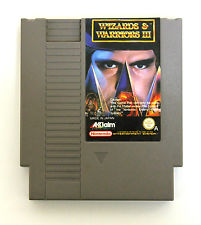 You're viewing: Wizards and Warriors III NES $49.99
Add to cart