WrestleMania Challenge NES Game Cartridge
WWF Wrestlemania Challenge was released for the NES in 1990. It was developed by Rare and published by LJN. In this game, there will be nine wrestlers to select from. They are Jim Duggan, Rick Rude, Brutus Beefcake, Big Boss Man, Ultimate Warrior, Randy Savage, Andre the Giant, and Hulk Hogan. It will also feature fluid gameplay and movesets that are unique for each wrestler, though the movesets are small. The matches will be viewed from the ring at an isometric view that is high angle. The stamina bars of the wrestlers will be across the apron. Whenever a wrestler has an empty bar, they will become vulnerable to be pinned.
The gameplay modes will include singles matches, tag team matches, and a Survivor Series three vs Three elimination match. During the tag team and three vs three matches, the player is able to have their computer partner to go attack the computer opponent outside or inside the ring. There is the championship mode that will have a player take control of themselves and will need to defeat all the wrestlers in the game to claim the championship. Along with this mode is a championship tag team mode that is two players only. Both players will control themselves and will need to defeat the other wrestlers in multiple tag team matches to claim the tag team championship.
UPC: 0-47600-59062-3
Platform: NES
Players: 1-2
Condition: Used
Genre: Sports
Region: NTSC (North America)
Rating: Everyone 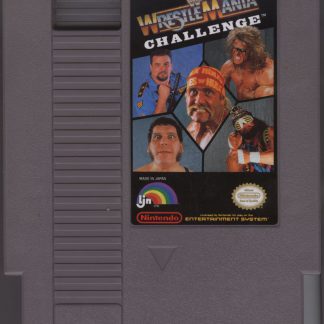