WrestleMania Steel Cage Challenge NES Game Cartridge
WWF Wrestlemania: Steel Cage Challenge was released for the NES in 1992. It was developed by Sculptured Software and published by Acclaim. There are ten wrestlers to select from and each version will have a different character set. All the versions will have The Undertaker, Bret Hart, I.R.S., Ted Dibiase, Randy Savage, and Hulk Hogan. The version on the NES will also have The Mountie, Roddy Piper, Sid Justice, and Jake Roberts. The version on Sega replaces those wrestlers with Tatanka, Shawn Michaels, Papa Shango, and Ric Flair. This became the first console game based on WWF that featured steel cage matches.
The modes included in the game will be singles matches, both a regular and steel cage variation, tag team matches, WWF Championship, and Tag Team Championship. In WWF Championship, a player will select a wrestler and try to defeat the other wrestlers to become the WWF Champion. In the Tag Team Championship, being one or two players, combinations of other wrestlers in multiple matches will need to be won to become WWF Tag Champions.
Every wrestler will share movesets which will consist of standard kicks and punches, grapples that include a headbutt, throw, and body slam, running attacks that include a dropkick and flying clothesline, a powerslam that can be performed from an opponent running at the player, ground attacks that include an elbow drop and a stomp, and one move from the turnbuckle. There will be no finishers in the game.
UPC: 0-23582-05186-4
Platform: NES
Players: 1-2
Condition: Used
Genre: Sports
Region: NTSC (North America)
Rating: Everyone 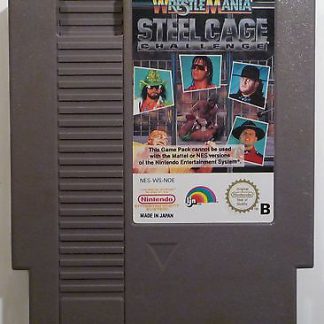