Yoshi NES Game Cartridge
Yoshi was released for the NES in 1992. It was developed by Game Freak and published by Nintendo. The game has falling blocks that the player will use on the playing field provided and it will be split into four different columns. The goal is matching the shells that are Yoshi eggs to have them hatch. While doing this, the player will need to prevent of the columns to be stacked too high from the monsters that are falling. Mario will be underneath the columns the player will use to swap stacks around so the monsters that are falling will disappear when they contact another monster block they match.
The monsters that appear will consist of a variety of Mario enemies. They will start at the screen’s top and fall into whichever column it is located above. When they land in a column, they will turn into a block and create stacks that will incrementally grow. The player’s objective is preventing any of the four columns from getting too tall by having the blocks disappear from the playing field. A game over will occur whenever any column stack crosses the line that is drawn at the playing field’s top.
For the player to destroy a block that is at a stack’s top, it will need to contact with another monster that matches itself. An example is if a falling monster is a Goomba and it falls right onto another Goomba block, both of those monsters will be destroyed. The player will control Mario who is residing below the game’s playing field. He will be used for swapping positions any two stacks that are adjacent at the same time. This will force the player to swap around stacks to make sure the monsters will fall onto the desired columns. For every monster set destroyed, the player will be awarded points.
Additionally to having four different monster types, there will be two Yoshi eggshell halves that will fall. The eggshell’s bottom half will act as a monster, as it will disappear when it contacts another eggshell bottom half. If an eggshell’s top half comes into play and contacts a bottom half, both pieces will join together and a Yoshi will be hatched. This will earn the player extra points. Also, if there is a monster stack growing on an eggshell’s bottom half and then the top half is added, all the monsters that are between the two halves will become encased and then destroyed. A larger Yoshi character will hatch depending on the amount of monsters that were encased. This will also increase the bonus points awarded to the player. If a top half falls onto a stack with not bottom half, it will automatically disappear and there will be no points awarded.
Single player will have two mode variations, which are A-Type mode and B-Type mode. In the A-Type mode, the game will be played endlessly until a game over occurs with the player. In the B-Type mode, the player will play levels in series in which it will be required by the player to clear the entire playing field of every block. The amount of initial blocks at a level’s start will grow as progression is achieved by the player. While playing multiplayer, player two will control Luigi. Both players will play the game simultaneously on separate fields using regular game rules. A player will win the match when they clear all blocks on their field or when a game over occurs for the other player. The first to win 3 matches will win overall.
UPC: 0-45496-63069-0
Platform: NES
Players: 1-2
Condition: Used
Genre: Puzzle
Region: NTSC (North America)
Rating: Everyone 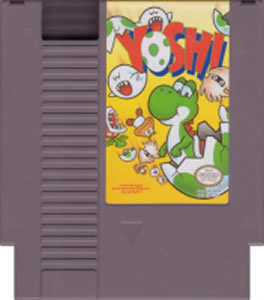