Gotcha NES Game Cartridge
Gotcha! The Sport! was released in 1987 for the NES and is based on Gotcha!, a film from 1985. The Nintendo Light Gun is used and the game is capturing the flag style gameplay. The game has simulated paintballs that are loaded into the paintball guns.
The goal of the game is to finish the level, capture the enemies’ flag, and then get it back to your own base. The flag is captured when you shoot it. The player will need to avoid getting shot from the other teams’ paintballs, not run out of ammunition, or have the time run out. The Nintendo gun is needed for the game, but the controller is also necessary. Using the controller will have the screen shift left to right. Ammunition boxes are located through the levels on the ground or the enemies from the background will be carrying them. Missing will cost you ammo, but if your aim is accurate, you will get a bonus for any leftover ammo at the end of the level.
The three levels are Woods, Snow Fields, and Warehouse District. The enemies shown in the Snow Fields and Woods are in military clothing, and the enemies shown in the Warehouse level look like punks from the 1980’s. The rounds for the levels repeat forever, but every time around the enemies will reload faster and have more shots fired.
UPC: 0-23582-05153-6
Platform: NES
Players: 1-2
Condition: Used
Genre: Shooter
Region: NTSC (North America)
Rating: Everyone 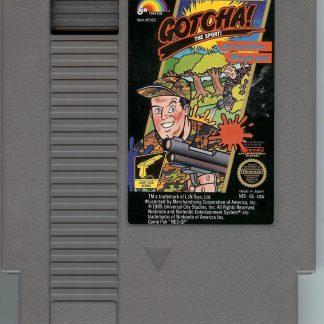