View cart “Namco Museum Vol 3 Playstation” has been added to your cart.

Family Feud SNES Game Cartridge
Family Feud was released for the SNES in 1993. It was developed by Imagineering and published by GameTek. This version will differ from the others and has 4,000+ survey questions. Rules will go by the actual show and be split into rounds with each family getting three strikes before the other family has a chance to steal the points. Once a family accumulates 300 points, they will win the normal game. The Bulls Eye Round, which was introduced into the show during that time, will also be featured.
The player will answer the questions by using the SNES controller’s D-Pad to control a cursor and then press the correct button to choose the letter to spell out the answer they want to input. Players are able to go against each other and also customize the family they use to what they like. This includes hobbies, appearance, occupations, and intelligence. Rules can also be customized to better suit a player.
UPC: 0-43948-51060-6
Platform: SNES
Players: 1-2
Condition: Used
Genre: Other
Region: NTSC (North America)
Rating: Everyone 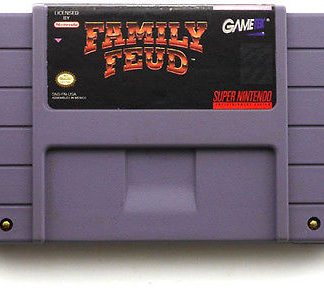