View cart “Ford Racing 2 Playstation 2” has been added to your cart.

Kyle Petty’s No Fear Racing SNES Game Cartridge
Kyle Petty’s No Fear Racing was released for the SNES in 1995. Leland Interactive Media developed the game and Williams Entertainment published it. All of the vehicles in this game are portrayed as generic Chevrolet Luminas, the 1994 versions, despite having a variety of manufacturers during the actual NASCAR Winston Cup Series in 1994.
The player’s goal is getting as close as they can to first position by the race’s end. Some practice will be needed if a player wants to begin at pole position. While playing season mode, points will need to be scored to stay within the competition. The mode for two players will allow two people to go against one another with split screen. There will be equal opportunity allowed with competition and teamwork during single races along with season mode. The players are able to race either exhibition mode or season mode.
The player will have the capability of creating a race course. There will be custom decals that can be placed on their course to personalize it. This is able to be done at an extent where no courses will ever look exactly like the other. After the track’s layout has been built, the player is able to select a song that plays when racing on the course they created. Tracks that are favorites to some players are also able to be created.
UPC: 0-31719-19942-6
Platform: SNES
Players: 1-2
Condition: Used
Genre: Racing
Region: NTSC (North America)
Rating: Everyone 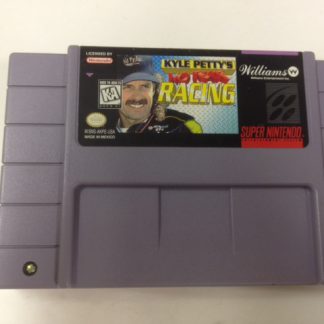