T &amp; C Surf Design NES Game Cartridge
T&amp;C Surf Designs was released for the NES in 1988. It was developed by Atlus and published by LJN. The game’s title is shared with a surfboard manufacturer that is world famous, Town &amp; Country Surf designs. The game had a sequel called Town &amp; Country II: Thrilla’s Surfari that was released in 1992. While the sequel had characters and the title in common, the gameplay strayed away from the original and took on more of a platforming and action element. It will also feature the mascot characters from the company, Da Boys. Those characters are Tiki Man, Joe Cool, Kool Kat, and Thrilla Gorilla.
The game will feature surfing and skateboarding games. The section for skating will be a side scroller game where the player will navigate through the obstacle course without running out of time. In general, the player will want to accumulate the most points possible by jumping over some items, performing tricks, and obtaining bonuses. If the player crashes too much, the timer runs out, falls in a hole, etc, they will get a game over. During the section for surfing, the player will surf a large wave that leads to a beach. Like the skating, the player is able to accumulate points by collecting bonuses and performing tricks. Likewise, it is game over if the player crashes too much. The player can play the games individually or switch between them.
UPC: 0-23582-05152-9
Platform: NES
Players: 1-2
Condition: Used
Genre: Sports
Region: NTSC (North America)
Rating: Everyone
You might also like
Featured Series 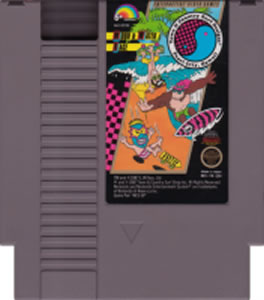