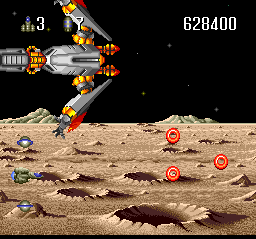 You know even as a Turbo Grafx-16 owner back in the day I said enough is enough when it came to shooters.  The system was sorely lacking in variety in its library so every new shooter announcement that wasn’t on the level of Gate of Thunder was groan inducing.  As you can imagine with that many games in the genre many of them were strictly average, a description that fits Dead Moon perfectly.

Everything about Dead Moon has been done before, even down to its story.   A comet detected in the vicinity of Pluto enters our solar system and rather than missing Earth like it should have it instead seeks out and destroys the probes sent to observe its trajectory.  Once it crash lands on the moon it is discovered that the comet was host to aliens and a lone fighter is sent to destroy them.

Sound familiar?  The premise could have come from nearly any shmup and all of the game’s features share the same trait. Not every game needs to be original of course, but they can at least offer a level of polish that will make you forget its lack of originality.  Dead Moon suffers by being a strictly average shooter on a platform that is inundated with them, with some being some of the best representations of the genre.

The 4 weapons available might seem at home to veteran shmup fans.  The Red circular spread is identical to the ripple in Life Force.  The yellow spread gun is self-explanatory as well as the green wave beam and blue lasers.  One cool feature is weapon stacking; collecting more of the same weapon will increase its power exponentially.

For defense you can pick up homing missiles and 2 options that also stack.  More missiles are fired at once while the options will progress from static orbs at your side to providing a rotating shield.  It’s a well done power-up system that would have benefited more from original weapons rather than the standards that most shooters draw upon.

Although the fight starts on Earth it quickly shifts to the moon as the Dead Moon forces try to stop your advance.  I will say one thing about the game, it is pretty.  While the city streets of the first level are eerily reminiscent of Aero Blasters the varied backdrops of the moon are very well done.  Parallax scrolling was not all too common on the system but Dead Moon sometimes goes 3-4 layers deep, creating an excellent illusion of depth to the backgrounds.  It’s a strange thing to take notice of but many of the enemies and almost all of the bosses are dead creatures of some sort.  I guess it gets points for originality but its pretty fricking strange.

Although Dead Moon has good graphics you won’t have much time to stop and admire the sights due to its brevity.  At 6 levels that last all of 5 minutes or so even novice gamers will have no trouble seeing the end in one sitting.  This is also helped by the very generous way death is handled.  Any time you are hit your current weapon is downgraded.  It isn’t until it hits its basic form that you will die.  This can take as many as 5-6 hits, more than enough to cover sloppy mistakes.  With unlimited continues as well you’ll have this licked in under an hour.

So you have an average shooter that can be finished in 30 minutes or thereabouts by even the scrubbiest players.  Unless you live and breathe for shooters I see no reason anyone should bother tracking down Dead Moon.  There are far better games to play.