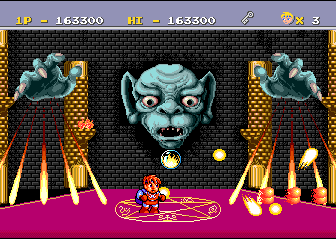 Now that I look back on it the Turbo Grafx-16 has very few pure side scrolling platformers.  Oh it’s well documented just ridiculously over crowded the system is with shooters but for those that enjoy a good butt bouncing like Mario or Sonic there were few choices.  Irem’s Legend of Hero Tonma was an arcade port released in 1993 and even considering the slim pickings is merely adequate at best.

The story is brief and just enough to get the action rolling.  Tonma is the apprentice of Merlin and after completing his magic training is revealed to be a Prince.  Not just that, he is also destined to save a princess.  Not the princess, a princess.  Hey we’ve set out on numerous video game adventures with even flimsier premises so Tonma gets a pass.  As an arcade port Legend of Hero Tonma is a decent conversion however when judged on its own merits the game is strictly average.

You certainly won’t be unarmed on your quest.  As a magician Tonma has access to an ever increasingly powerful number of spells.  The standard fireball can be heavily upgraded, from the standard single shot to an arcing blast to a heat seeking burst of flame.  An even nicer property of the power-up system is that these upgrades are layered on top of each other.  When all else fails the typical butt bounce can come in handy.  Every level is littered with power-ups and you’ll need it since the game is not easy.

On the surface Tonma looks deceptively simple however that belies its true nature, that of an evil beast.  All of the more popular tricks designers used to nail gamers are fully represented here.  From tricky enemy placement to split second enemy fire, there’s no mistake that this was originally an arcade game.  Some of the vertical levels really ratchet up the intensity since you won’t see what’s above you until it’s too late.  If you die you are sent back to a mid level checkpoint so at least you have room to power-up somewhat to give it another go round.  The boss fights are not as hard as the levels themselves but they can overwhelm you at times with tricky enemy fire and sheer chaos.  There are unlimited continues but that is a small concession to the high volume of deaths you’ll experience on your way to the end.

At 7 levels there just isn’t enough meat on game’s bones to keep you interested for long.  While the game certainly does its damndest to deter you it’s only a matter time until you reach the end, a time that I estimate to be an hour or two at most.  There’s no compelling reason to go back for another round and with much better games in this genre you would have to be hard up for another platformer to even bother with Legend of Hero Tonma.

You would be better served with the Bonk series of games if you are in the market for a TG-16 side scroller.  While it isn’t bad there is nothing exceptional about the Legend of Hero Tonma either.  When the competition is so fierce average isn’t good enough.