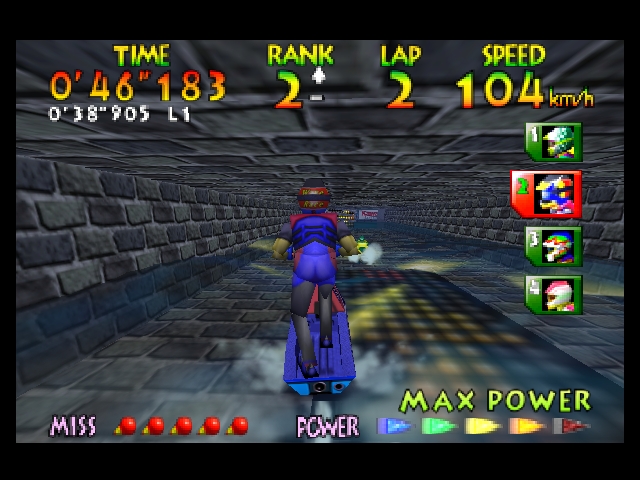 Hype is an inescapable part of the video game industry.  Whether it is a developer extolling the virtues of their latest creation to game journalists struggling to put into words how awesome a new product they’ve just seen is, we are all guilty of falling for it.  New console launches are when these events are at their peak.  We can all remember the PS2 hype and how it played a part in killing the Dreamcast.  But arguably the N64 played host to even bigger launch promises, such as being a Silicon Graphics Workstation in console form.  It fell far short of those expectations but still we wanted to believe.  Why?  Because of games like Wave Race 64.

Wave Race 64 was released as a near launch title for the N64 in the US.  Previously demoed at Nintendo’s annual Shoshinkai show in 1995 it would emerge some months later in a completely new form, ditching the Speedboats from the original gameboy game (bet you didn’t know about that) for riders on Jet skis.  The change made little difference as the game was and is absolutely phenomenal, with a wealth of game modes and tracks to plow through.

You have a choice between 4 riders with their own stats in 3 categories.  These can be manually edited to create the feel you want to an extent.  Championship pits you in a race against 3 opponents as you accrue points needed to qualify for the next race.  3 opponents does not sound like much but it will make you shit a brick when you are in 4th and in danger of disqualifying.

Depending on the difficulty the amount of points needed to progress increases as well as adding new tracks to the race, giving you further incentive to move ahead.  Stunt mode lets you show off your tricks for points, and I freely admit to losing any skill I once had in it.  The tracks unlocked can be taken for a test drive in Warm up mode and Time Trial.  Memorizing the layouts will only get you so far as the accurate water physics represent the other side of the picture for each race.

The water does a lot more than simply look pretty.  Depending on the track, difficulty, and racer chosen your handling will be affected, giving you something else to consider besides the other racers.  The way the jet skis bob and weave along the surface of the water, cut into the waves as you turn or even skid on ice is simply unparalleled, even to this day.  As you build up speed itwill also play a factor in how the water will affect your handling.  The tracks change dynamically as time passes, with once blocked off track elements opening up to reveal shortcuts that come with equal parts risk and reward.

Kicking up the difficulty  enriches the tracks with more buoys to pass, spikes to knock you off your jet ski and a bump in the CPU rider’s driving prowess.  There are no cheap gimmicks used, they’ll simply bump you more aggressively and actively use shortcuts as they open up.  In addition water conditions become more erratic with far more big waves to ride and currents that will throw you around.  They almost become new tracks and enhance the fun factor as you familiarize yourself with buoy layouts.

Back in 1996 no home console game looked like this.

A lot of promises were made about the N64’s graphical prowess and while the system did not live up to the lofty expectations placed on it games like Wave Race made everyone forget.  Wave Race was a virtual revelation, with ridiculous transparencies and previously impossible water.  The weather conditions change as time passes setting the mood for the courses, such as the setting sun of Sunset Bay or the night lights of Twilight City.  Watching the fog part and seeing the perfect reflections on the surface of the water of Drake Lake is still magical nearly 20 years later.  The only sub par element would be the blocky character models but you aren’t even paying attention to those lamers anyway.  It took many years for the water in this game to be surpassed, a testament to the creator’s craftsmanship.

This is still one of the best racing games ever made.  When you think about it it seems really stupid that very few racing games on water had been made.  Nintendo kind of ruined it for everyone else by setting the bar so high but we as gamers ultimately benefited.  Its funny to think that concerns were raised that because of cartridge space there wouldn’t be enough content to satiate gamers when this game had more to offer than 3 or 4 of the racing games of the time combined.  A masterpiece however you slice it.