MUSCLE NES Game Cartridge
Tag Team Match: M.U.S.C.L.E. was released for the NES in 1986. It was develpoed by TOSE and published by Bandai. The toy line of M.U.S.C.L.E. is what the game is based on. There will be a singles mode for one vs one and a tag team mode for two vs two. The player can play the computer or another human player. Pressing A will have the player’s wrestler jump and pressing B will have the wrestler punch or it will activate their special move when the energy ball is collected randomly thrown by a boy named Meat. The moves the the player can do are jump. punch, shove, push into ropes, drop kick, flying attack (jumping into the ropes and then rebounding), clothes line aka lariat, push opponent into the ropes and hitting A, and the suplex aka back drop (pressing B behind the opponent when close).
The game will have eight characters to choose from. The first is Muscleman whose finisher is the Kinniku Driver. This move has Muscleman carry his opponent and then jumps off of the screen up into the air and then comes straight down. This is one of the most damaging moves in this game. The second wrestler is Terryman whose finisher is a Bull Dog Headlock, which is a faster version of a lariat without having to use the ropes for rebound and it can be used repeatedly. The third wrestler is Ramenman whose finisher is the Leg Lariat, which is a longer and faster version of a drop kick. The fourth wrestler is Robin Mask whose finisher is the Tower Bridge, which is a back breaker from pro wrestler Lex Luger. The fifth wrestler is Terri-bull whose finisher is the Hurricane Mixer, which he will charge from a short distance with the horned head. The sixth wrestler is the Warsman whose finisher is the Bear Claw, which will cover a longer distance than a hurricane mixer. The seventh wrestler is Ashuraman and the eight wrestler is Geronimo, whose finishers are the Ashura Buster and the Apache War Cry, respectively. Also, the three types of rings available are a normal ring, an Ice-Top Ring, and a Ring with electric ropes.
UPC: 0-45557-87200-7
Platform: NES
Players: 1-2
Condition: Used
Genre: Sports
Region: NTSC (North America)
Rating: Everyone 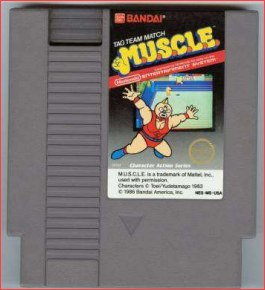