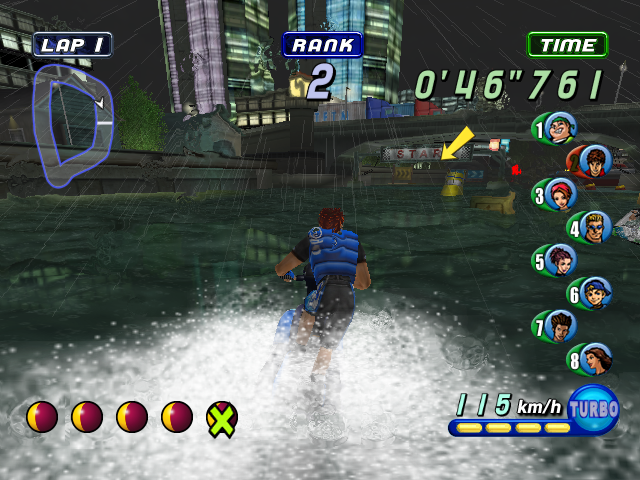 I can safely say that I’ve sunk more hours into Wave Race 64 than any other racing game outside of Super Mario Kart. I went into it with no expectations and was completely blown away. Who would have thought a sequel to a little known Game Boy title would be one of the most stunning games of that generation? So of course when Wave Race Blue Storm was announced they had my immediate attention. Although it doesn’t stray far from what made its predecessor great (it is a racing game after all) Blue Storm is a more than worthy follow-up to its legendary predecessor.

Right off the bat it is obvious the game has been significantly expanded. The roster of competitors has doubled to eight which has a major impact on the game’s championship and stunt modes. Now each character is rated in five different categories so that you can see where there strengths lie. There’s a wide spectrum in terms of performance with the likes of Ryota and Akari being perfect for beginners while Serena and David Mariner have steep learning curves in order to bring out their best.  Every character leans towards a particular stat and it has a substantial impact on the game’s handling.

There are a number of subtle additions to the controls that can affect your performance and help shave seconds off the clock or boost you to number 1. Both L & R allow you to lean and make sharper turns while B will crouch and build speed, perfect for straightaways. The Turbo you get from passing the buoys correctly can be used for a quick burst of speed as well. While you can ignore some of these mechanics on the harder difficulties they are practically essential. You can still customize the tightness of the handling and whether your jet ski will prioritize acceleration or top speed but they don’t feel as tangible as in Wave Race 64. I’ll admit that adjusting to the tightness of the controls here was difficult at first; I’ve dumped hundreds of hours into the N64 game so I think my initial reaction was always going to be biased. But once I tooled around the tracks in Free Run I began to appreciate the added nuances and can see why they are such a great fit.

There are a wealth of modes to keep anyone entertained for many hours. Championship is the game’s heart and soul and has been overhauled. With double the competitors the number of qualifying points is stricter but it also allows for some room for error. The three difficulty settings take place over the course of 5, 6, and 7 days with each day comprising one race. Rather than following a set path you can select which is to your benefit as certain tracks are a nightmare depending on the weather. This allows you to save the tougher courses for clear days that are simpler. Overall the difficulty is pretty steep as the game throws you in the deep end after the initial exhibition round. It will definitely behoove you to tool around each track in the Free Run mode to learn their intricacies. The Stunt Mode returns with a slew of new tricks to perform but is also subject to the bump in difficulty. The tutorial mode will teach you how to perform each trick but actually performing them when it counts is a true test of skill. All of these modes can also be enjoyed with up to four players this time around as well.

The water physics are already pretty astounding but what truly adds another dimension to the game is the weather system. The five weather conditions (Cloudy with slight rain, clear skies, partly cloudy, rainy, and thunderstorm) have drastic efforts on the water levels, visibility, and even the height of the waves. Ocean City Harbor is already challenging with its tightly packed buoy placement but a rainstorm will cause huge waves that can send you crashing into walls. Rain is completely bad as it can even be beneficial; Aspen Lake has huge boulders that need to navigated around but with a rise in water they are submerged. What’s even cooler is that the system is dynamic and will change from one lap to the next. Although there are only eight tracks the weather adds a huge amount of variation and even the difficulty you select will open up new routes and such.

As much as I do like the dynamics the differing weather bring to the table it is still true that the game can feel more like an expansion pack than a true sequel. Of the eight courses Dolphin Park and Southern Island are exactly the same as their Nintendo 64 counterparts. Aspen Lake and Ocean City Harbor draw strong parallels to Drake Lake and Twilight City. The graphical facelift certainly does help to make them feel new but it is still disappointing that almost half the content feels like a rehash.

Naturally with the move to the GameCube the graphics are amazing. The chunky character models have been completely overhauled and actually resemble human beings rather than lego blocks stitched together. There is far more track side detail and even under the water there is a vast amount of sea life that truly brings the tracks to life. There’s a greater variety in the locations you’ll visit plus the varying weather completely changes the tone as well as look of each course. The lighting and actual fog effects are still astounding to this day and the frame rate is locked at 30 with almost zero drops, even in multiplayer. Truly impressive stuff.

The game’s water is both impressive and a bit disappointing. The transparent water and perfect reflections on its surface are just…exquisite. These reflections also warp and distort in sync with the wakes the jet skis kick up which goes to show the attention to detail the designers put in. However the cool specular lighting of Wave Race 64 is gone and its absence is definitely noticeable. The clear water looks nice but also seems a bit too perfect. If you look close you’ll spot a number of low resolution textures scattered about and the riders themselves feel flat and undefined. These sacrifices were probably made to keep the frame rate so steady and in that respect they’ve succeeded.

The synth music of Wave Race 64 has given way to a more contemporary rock soundtrack that isn’t to my liking. There’s a great deal of music here but a lot of the tracks are simple remixes of the core 10-15 songs. Each character has their own announcer, no doubt thanks to the added disc space and they are all just as exuberant as the first game.

Despite being a GameCube launch title Wave Race Blue Storm still held the title as the best water based racing game of the generation. While it doesn’t reach the same height as its predecessor it is an excellent sequel and a game that is definitely worth tracking down.