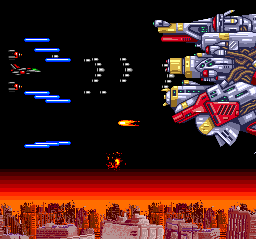 Nowadays we’re suffering through a glut of first person shooters.  I imagine fans of the genre are happier than a pig swimming in its own feces right about now.  In the 80s and 90s a different brand of shooter was all the rage: the shmup.  From the arcades to home consoles there were an army of these bastards, with the Genesis and Turbo Grafx-16 receiving the majority.  One such release was an arcade port of the Air Buster arcade game.

Aero Blasters was released for the Turbo Grafx-16 in 1990 and the following year for the Genesis as Air Buster.  The story is standard shooter tripe with you once again piloting a lone ship to stop an alien invasion, this time with optional 2 player coop.  Both versions of the game differ from the original arcade machine and to some extent are tailored to their individual hardware.  Regardless of which one you choose this is an excellent shooter that while not original does everything right for enjoyable experience.

Vast arrays of armaments are at your disposal to thwart the alien menace.  By charging the attack button you can release a smart bomb that will destroy weaker enemies and most importantly bullets.  Your standard shot can be upgraded a number of times by collecting P power-ups and will be your most effective weapon.  Unlike the majority of shmups on the market, power-ups are thrown at you with reckless abandon.  Unfortunately a good portion of them pale in comparison to the standard cannon once powered up and actually are hindrances more than often not.  The only ones worth bothering with are the homing missiles and striker options.  The challenge is tuned near perfectly with a nice ramp up the farther you progress.  By the 4th level you’ll have to contend with zero gravity along with an increase in the number of enemies and more complex boss patterns.

For its time this was a visually stunning game and the home conversions despite some changes follow suit.  The Turbo-Grafx edition is especially impressive considering the hardware’s lack of parallax scrolling; at times the backgrounds are 2-3 layers deep.  The cosmetic changes are less background detail and smaller enemy sprites.  This might sound blasphemous but for certain stages I prefer the look of the TG-16 game, especially the first stage with its visible horizon in the background and more detailed skyline.  The Genesis game sticks closer to the look of the arcade machine and largely succeeds at mimicking the look.  There is less detail overall but it’s about as well as you would expect.  Musically the Genesis game suffers from less punchy sound effects and a more muted score.  I loved the music in the Turbo Grafx game and was disappointed the Sega game did not receive the same treatment.  To see how each version stacks up against each other check here: http://www.pcengine.co.uk/HTML_Comps/Comp_AeroBlasters.htm (TG-16 ) & http://www.youtube.com/watch?v=ynQQdJ0WxU4.

It’s hard to stand out on consoles swamped with shooters unless you do something radically different.  This does not fall into that category but that remains a fault (if you can even call it that) of its arcade brethren.  However it remains a fun game with good graphics, a nice soundtrack and a fair challenge.  Regardless of the version you pick you still find a few hours of enjoyment out of this title either way.