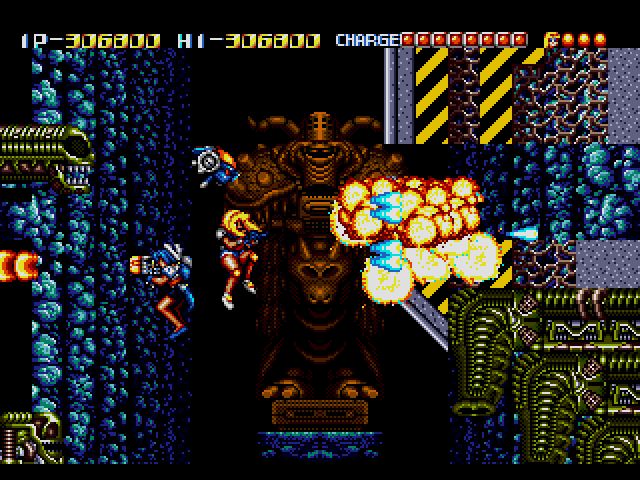 In the rush leading up to the Saturn’s surprise US launch Sega of Japan effectively killed support for the Genesis worldwide. It made sense for Japan as the system tanked there but it was still thriving in every other market. With little support from Sega third parties also followed suit with some of the most brilliant games for the platform being left in Japan. One such gem that has become highly sought after due to its price and low profile is Battle Mania Daiginjou, the sequel to what we know as Trouble Shooter. This low profile classic is one of the single best games for the system regardless of genre and one that I recommend to any Sega Genesis fan.

After the defeat of Don Morgstein Maria forces Prince Eden to hold a parade in her honor and gets drunk in the process. A few days later however Morgstein has been brought back to life and issues a challenge to the pair. However only Mania (surprisingly) is sober enough to answer the call at first and find out who is behind Don Morgstein’s resurrection.

In terms of gameplay not much has changed because there was very little wrong with Trouble Shooter’s mechanics. You still control Mania and can reposition Maria when needed. Your designated special weapon now follows close behind and functions like an satellite, with a few options governing its own movement. Speaking of movement there are three targeting choices this time: the default in which Mania will always face right, two-way which allows you to shoot left or right and the best option in my opinion, 8-way. Holding down the fire button will lock your firing direction in place. Otherwise you can freely move around as needed. It’s confusing at first but becomes intuitive in seconds and is the all-around best choice.

The Kikokukyou cult responsible for the game’s troubles are just as insane as Anagran and will toss everything possible in your direction to deter you. How many other games see you fighting flying fish and meteors while scaling a massive tower? The Demon Train rockets down the streets of Tokyo, tossing aside the police with our heroines in hot pursuit in a car. The kikokukyou temple is probably my favorite, both aesthetically and mechanically. Here the environment is constantly changing and will box you in or even cut off your fire as you are being assaulted from all sides, even from above by a giant Godzilla sized foot.

Behind the craziness of the game’s story and action lies a game with some of the strongest pacing and level design among 16-bit shooters. There is rarely a dull moment as there are always enemies waiting to accost you at a moment’s notice yet it never feels overwhelming. Each individual stage is wholly unique, offering its own set of enemies and traps to contend with. Although this is primarily a horizontal shooter the game scrolls in every direction for a nice change of pace such as stage four’s descent into the Kikokukyou base or exploring the inside of the demon train. It is in situations like these that you’ll appreciate the expanded targeting options, especially the 8-way option. The game’s basic concept hasn’t changed much but it didn’t need to, as evidenced by just how much fun the game is while retaining nearly the exact same mechanics.

Most important of all the game is challenging yet always fair. Because Mania and Maria are so large dodging bullets is much tougher. Plus it is easy to lose track of both characters and forget that only Mania can take hits. The game does a good job of forcing you to reposition Maria to survive and for maximum effectiveness. It is also generous with life restoring hearts but not as much as its prequel. Considering how overpowered your special weapons are it’s a wonder that the game isn’t a breeze but that is evidence of its strong design. Plus with nine levels rather than six this time you more than get your money’s worth.

Trouble Shooter was already an exceptionally pretty game and yet Daiginjou surpasses it in every way. I dare say this is one of the best looking titles ever produces for the system. Battle Mania doesn’t rely on special effects of any kind but rather brilliant art direction. The game’s anime style plot allows it to produce an array of wacky yet clever scenarios that lead to some of the prettiest backdrops in a shooter. There is up to six layers of scrolling in the backgrounds with an insane attention to detail. The sprites are large and animate wonderfully with nary a hint of slowdown to be found. It’s funny, the fodder enemies are the size of the bosses in lesser shooters, with the game’s actual mayors becoming screen filling bad asses who change forms multiple times.

The music has seen a similar upgrade and is simply fantastic. The FM synthesizer is given a thorough work out as the selection of music is much richer with better use of guitars and drums. There’s a greater variety to the songs as well and it shows just how rich the Genesis’s sound chip could be in the right hands.

There is no question in my mind that Battle Mania Daiginjou is one of the best games released for the system it is just too bad that most will never have a chance to experience it. The game had an extremely low print run and is exorbitantly expensive. For those that want to play it in English a translation patch has been released but it’s not as if you’ll miss much if you play it in Japanese. It’s a god damn crime that more than likely this will never be re-released digitally.