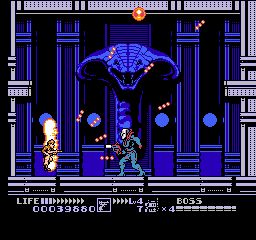 1992 is the year I started to buy video game magazines consistently and with that my eyes were opened to a ton of new releases that I would never have heard about. GI Joe: the Atlantis Factor is a game that would have escaped my radar without seeing a review of it in Gamepro. As an NES game in 1992 it already had a low profile but its faults in comparison to the first game probably have something to do with that. In trying to create a deeper action game than the original the developers have only succeeded in ensuring most will be too frustrated to finish it. While still a solid game it is second best compared to the excellent original.

GI Joe: the Atlantis Factor follows a similar structure to Bionic Commando with its map full of branching paths and levels. I wonder if the game’s setup was already set in stone or suggested by Capcom when they decided to publish it. Anyway unlike that game you won’t have to worry about random attacks as you plan your path to Cobra Commander’s base. The map is divided into routes which lead to the lettered Areas with boss battles and a member of the Joe team in need of rescue.

This is probably the biggest departure from the original. You begin the game with General Hawk and must assemble the team one by one. General Hawk is well rounded but it really sucks having to wait until you can play as your favorite character. Roadblock, Storm Shadow, Snake Eyes, Wet Suit, and Duke comprise the playable roster with Gung Ho providing ammo when called and Spirit resurrecting one character if they are killed in action. The order you obtain them is largely up to you and it is possible to beat the game without saving anyone although that would just be stupid.

More work was done to make each Joe distinct and they’ve succeeded somewhat while introducing some annoyances. Aside from their different stats (which the game doesn’t show this time) each has at least one special ability. Roadblock can crawl through tight spaces, Wet Suit can dive underwater, and Duke can fire in four directions. Both Snake Eyes and Storm Shadow jump the highest and wield swords for longer range with their melee attacks. What’s cool is that you can select any three for a given level and switch between them at any time, which you’ll need to do to max out their weapons.

Once you’ve found the laser gun, rocket launcher, and wave gun they become available to everyone. However to increase their efficiency everyone has to level up their skills separately, including melee attacks. Skills can be increased four times and in a nice touch change in appearance at higher levels such as Duke’s machine gun becoming a five way shot when maxed out. For Storm Shadow and Snake Eyes their swords fire a small beam at level four which is powerful and conserves ammo. To balance this out they both have the lowest starting health at 3 and 2 (2!) hits respectively.

While this all sounds cool in theory in practice the constant switching for power-ups is tedious. Drops from enemies are unreliable and so you have to smash every container in hopes of finding something. Meanwhile the tight clock discourages exploration. In my opinion the character distinction was taken too far with the leveling system. You need to have a balanced party since I can guarantee you’ll die frequently during boss battles if you make it that far and winning with an underpowered Joe is simply not possible.

The first GI Joe game was difficult but the Atlantis Factor takes it to another level. Rations and ammo in general are in shorter supply, forcing you to rely on hand to hand combat far too much. Leveling up each individual character’s weapons grinds to a halt towards the end of the game as items become even scarcer. For Joe’s like Snake Eyes and Storm Shadow who need the health boosts to become worth using this is a problem since they’ll be useless for the majority of the time you have them. It sounds nitpicky but the constant need to switch characters in order to ensure they receive power-ups is annoying, especially when said items seem dead set on avoiding you.

Technically you can focus on one guy but that would be stupid and you’ll want to take advantage of everyone’s separate life bar to survive. Unfortunately ammo is shared and you’ll need to hoard it for the brutal boss battles since your fists are useless there. You are not punching these guys to death, trust me as it would not only take far too long even at max level but I guarantee you would die long before then.

These flaws aren’t game breaking but are frustrating enough that they drag the game down a bit. They stand out even more since the rest of the game is so accomplished. The level design is well thought out and the controls are excellent like its predecessor. However somewhere along the way the well intentioned changes to the party system make an already challenging game even worse. Only the truly skilled need apply.

Developer KID were somewhat underrated among NES developers and yet their titles pushed the system the hardest. Kick Master is one of the finest action platformers to hit the console and Recca is quite possibly the most technically brilliant game ever conceived on that aging hardware. So it should come as no surprise that the Atlantis Factor looks great. The visual style is very similar to the first game except this time the backgrounds are more varied and many of the sprites are larger. Indeed, the bosses are twice your size and are accurate representations of their cartoon forms. Overall the game is definitely keeping company with other late era NES titles of the time.

As much as I like the Atlantis Factor I would still recommend the first game over it. Though hard it is still fair and less frustrating. Imagine a game that combined the best of both games, now that would truly have been something.