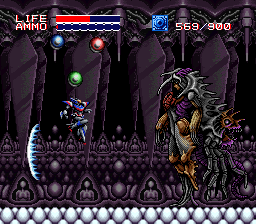 I really wanted to like Xardion. I remember seeing the magazine ads in Gamepro and the thought of controlling not one, not two, but three giant robots seemed cool as hell. But somewhere along the way that initial promise (in my mind at least) went wrong and we were left with an average that tries its novel best to drain any enthusiasm you might have had for its staid gameplay. The best of intentions means nothing if the end result doesn’t live up to expectations and in this case Xardion just can’t compete against other side scrolling action games.

The Alpha 1 Solar System has been on the losing side of a war with the planet NGC-1611. In a last ditch effort the Alpha 1 Federation gathers three of the system’s best mecha pilots to destroy the invader’s main source of power and hopefully find the Xardion, a legendary weapon that long ago was given to the opposing side as a peace offering. The plot is expounded on through in game chatter between the three heroes and while it is more than most action game offer you won’t pay much attention to it.

Like TMNT for NES you have multiple characters that can be switched at any time, each with their own strengths and weaknesses. Triton is well rounded and can fire upward. Panthera is shorter than the others and can crawl into tight spaces. Alcedes attacks using his antenna which has a longer range before unleashing its projectile and can jump higher than the others. Every character gains experience individually which increases your maximum HP and ammo at set levels plus unlocks other special abilities. There is some incentive to leveling up all three as the ending will slightly change (and I do stress slightly) depending on how much experience you have accrued.

It’s a nice idea in theory but in practice it is anything but. Triton is so far and away the best character that there is literally no reason to ever switch characters, all because he can actually fire upward. It sounds like a minor distinction but considering the number of aerial enemies you’ll face it is a god send. That leaves Panthera and Alcedes more or less useless as what little advantages they might have had are negated by that one fact. Their special weapons are powerful but don’t make up the difference in my opinion. Once the Xardion joins the team everyone else is background noise since even at level one it is vastly more powerful.

Despite there being nine levels the game is pretty short overall. Most stages are only a few screens long and were it not for the incredibly slow pace you could zip through the entire game in less than an hour. However it seemed the creators were aware of this as the game suffers from padding; you gain the Xardion right before the final level however it isn’t “strong” enough to progress, forcing you to go back and collect three items and raise its level. Honestly it isn’t hard to find these items but by that point you simply want the game to be over.

Xardion is pretty difficult overall not the least of which is due to how underpowered your characters feel. Even at max level stuff takes too long to kill and your bullets never seem to progress beyond the size of a pea shooter. It isn’t until you have access to the Xardion unit that you will actually feel powerful but that isn’t until the latter stage of the game. Defeating bosses only refills the life bar of that particular character with everyone else forced to wait and health restoring items are in short supply. The game is filled with cheap unavoidable hits with the final level an absolute nightmare in this regard. To the game’s credit you can revisit any planet multiple times to increase your levels but as I mentioned previously you don’t feel any stronger with each power-up.

In terms of presentation the game is hardly impressive. The mecha designs were cool back in 1992 when the US and Europe had only received a tiny amount of giant robot anime. However even back then I could tell they were derivative; Triton looks nearly identical to a Macross Veritech fighter in Battroid mode. The backgrounds are mostly flat and lifeless, often resembling a Turbo Grafx game with a layer of parallax. You would hope the same attention to detail lavished on the main characters would extend to the enemies however outside of the bosses, the game’s few highlights, they are all painfully generic. The soundtrack is so nondescript that I don’t remember any of it, that’s how dull it is.

Xardion isn’t a bad game per se but is simply average. There are a few neat ideas in here but the game’s rough edges and general lack of excitement prevent them from being fully explored. There are better side scrolling action games out there such as Lost Vikings that use the same concept to greater effect. You would be better off playing that instead.