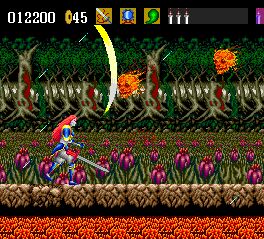 Namco were one of the few developers to support the Turbo Grafx-16 in the US with a wide range of software. Some of these were hidden gems like Final Lap Twin and others classics like Splatterhouse. Unfortunately they weren’t all winners as Samurai Ghost can attest. Pure action games along the lines Shinobi and its ilk weren’t in great supply on the platform but there were at least enough that you did not have to bother with awful drek like this.

Kagekiyo is an undead samurai who in life defeated a cadre of demons. However those same demons are now attempting to escape from hell and Kagekiyo is called to defeat them once again to save the Earth. It is an interesting premise that could have led to some cool action but it is instead let down by subpar action and controls.

In many ways controlling Kagekiyo is like playing Earnest Evans, just not as bad. You have full control over his sword arm to attack high or low, perform a downward thrust and to block attacks but the bad animation gives the impression that he is a marionette. Even jumping and running leaves his body perfectly rigid as his limbs move in place. It’s hilarious to see in motion but at least at the end of the day functional which EE can’t claim.

Controlling the angle of your attacks could have differentiated the game from similar titles but the bad controls let it down. Because your movements are a complete mess timing your attacks is frustrating as your attack range is so limited. The hit detection is also suspect as there were times I clearly slashed enemies only to have no effect. A few enemies can block your attacks and so you must attack from a different angle but it doesn’t work in practice. It’s one of the game’s rare moments of inspiration too bad the execution fails. There are only a few power-ups with the most common ones protecting you from slime and spikes. The few that increase your sword’s hit box or produce a wave attack are rare and only last a short time.

Beyond the frustrations with the controls however the game is let down by its simple design. This is as rudimentary as action games can get. As you slowly make your way through each of the game’s short levels haphazardly trying to hack up the few enemies in your path the action is broken up by some of the easiest platforming you’ve ever come across. Large sprites that take up a sizable portion of the screen simply don’t leave room for the type of nuanced game design found in better titles. They sure do make for eye catching screenshots though. This was the same problem with China Warrior and it should come as no surprise that Samurai Ghost is just as bad.

Surprisingly even with all of these flaws the game is incredibly easy. After each segment your life bar is refilled and aside from dealing with the annoying spiders that bind your legs there isn’t much that can kill you. Even the boss battles are tame by genre standards. With unlimited continues I have little doubt anyone foolish enough to buy this game will finish it in a little over half an hour and hate themselves for it.

Samurai Ghost has the look typical of many early TG-16 releases, incredibly large sprites set against vivid backdrops. However in this case the game differs from most as it actually has 2 layers of parallax scrolling. It gives the backgrounds depth and immediately sets it apart from the majority of releases on the system. I don’t know what black magic Namco worked to achieve that but it looks magnificent and not like whatever the hell they did in the PC Engine Ninja Gaiden. The large sprites unfortunately suffer from stiff and robotic animation. It’s more like manipulating a puppet than controlling a humanoid sprite and it really looks bad, now and even back in 1992.

While the system could certainly use more action games that doesn’t mean gamers should resort to flat out bad games like this. There are better alternatives available, both import and domestic. Leave this one on the shelf.