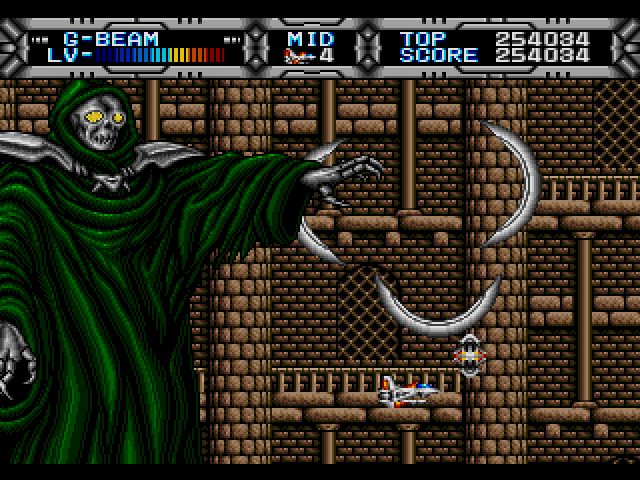 Thanks to its relatively fast processor the Genesis is home to nearly any incarnation of the shooter genre.  You like space ships?  Thunderforce.  You like cutesy shit?  Panorama Cotton (which is incredible by the way).  Arcade ports?  Afterburner 2.  You get the point.  For a game to truly stand out in a sea of similar fare it has to be special.  Gaiares is not only just that but one of the absolute best shooters ever released for the console.  That’s hefty praise but the game itself lives up to the hype and then some.

Gaiares does nothing to hide its anime inspired roots and actually uses that as a distinguishing point in its intro.  In the distant future Earth has become a wasteland due to man’s hubris.  A space pirate group named Gulfer has plans to harvest the planet’s waste to create WMDs.  An ultimatum is issued to Earth from the United Star Cluster of Leezaluth: destroy Gulfer or they will make the Sun go supernova and do it for us.  That’s a bit extreme don’t you think?  The exchange isn’t one sided however: Leezaluth offer to restore Earth if they are successful and offer an experimental ship to help in the process.

Despite Gaiares’ quality it was criminally overlooked by the masses.  There are a number of factors that led to this of course.  The game was released in 1990, a year before the Genesis would explode in popularity due to a certain blue hedgehog.  But if you ask me Renovation’s marketing of the game certainly didn’t do it any favors.  Observe:

Why they thought a dude with a mullet was such a perfect shill for the game I’ll never know.  But what I do know is that the campaign failed, leaving Gaiares a cult classic beloved by all who sampled its greatness.  Aside from the punishing difficulty Gaiares has something for everyone and has earned its place among the Sega shooter elite.

While most shooters were content to put their own little spin on the R-Type style power-up system Gaiares went for a different tact.  Aside from a shield that will protect you from a few hits and missiles your only weapon is the TMZ system that functions a bit similar to the Force in R-Type.  While it doesn’t attach to your ship it can be used a shield to block projectiles, adds extra firepower and can be shot out to destroy enemies.  It’s most important function is that it can latch on and steal enemy weapons.

Years before Square would experiment with this mechanic in Einhander Gaiares did it first.  The vast majority of enemies you come across will have some form of weapon you can capture and its one of the coolest weapon systems of all time.  As an added bonus, copying the same enemy type more than once will increase its level.  The weapons are fairly typical, ranging from thin lasers and homing shots to spread shots and wide beams.  Overall there are close to 20 weapons and the levels are long enough that you’ll have multiple opportunities to switch if you so choose.

The speed of the game takes some adjusting to.  Gaiares is a fast game, with the levels alternating between slower paced segments that emphasize careful maneuvering and break neck sections that literally don’t allow you to blink lest you die.  The background graphics feature tons of asteroids and warping effects, making it very easy to get lost in the chaos.  There are a few truly awesome moments in the levels such as navigating through a sea of black holes but the rest of the game doesn’t manage to keep up that level of creativity unfortunately.  Unlike the majority of space shooters out there the enemies you face are mostly robotic and feature a ton of really cool mech designs.

As you can imagine between the game’s speed and level design this is one tough beast.  You will literally earn every square inch of progress as the enemy assault is relentless.  Depending on the weapon you’ve captured the game can be mind-numbingly easy at times and controller smashing hard.  While the homing fire is incredibly useful for individual targets once they’ve separated into different groups around the screen you’re screwed.  The laser is powerful but covers so little screen real estate you’ll have to risk stepping in the line of fire to make it effective.  Each weapon is equal parts risk/reward but it sucks if you’ve chosen unwisely and can’t snag a replacement.

There are very few checkpoints in each level and you don’t respawn upon death.  The levels are a bit long and its soul crushing to die with a weapon you’ve maxed out and can’t immediately replace.  This is the type of game that revels in showing you an otherwise empty corridor only to slap you down for not noticing the loose bricks on the ceiling.  It might seem unfair but there are enough subtle visual cues that you can avoid the traps if you are patient.  There’s a hefty amount of trial and error involved in reaching each area’s conclusion.  There were plenty of Genesis shooters that allowed you to vary the speed of your ship but Gaiares is one of the few where it’s actually crucial to survive.  The bosses in particular move faster than you and the near uncontrollable max speed is the only means to keep up.  At 8 levels with limited continues I can safely say few will see the end of the game without cheating.

This is a tough one to grade.  On one hand it has everything that would place it in classic status, excellent graphics, innovative gameplay, and good controls but the challenge is higher than the average gamer is used to.  If you’re the type that can stomach a game that puts up a fight Gaiares is everything you can possibly want.  But if you’re a weak sauce gamer who needs his hand held look elsewhere.