Written by
Sayewonn
Posted in
Genesis
Tagged
action, all over your face, Gunstar Heroes, Sega, Treasure 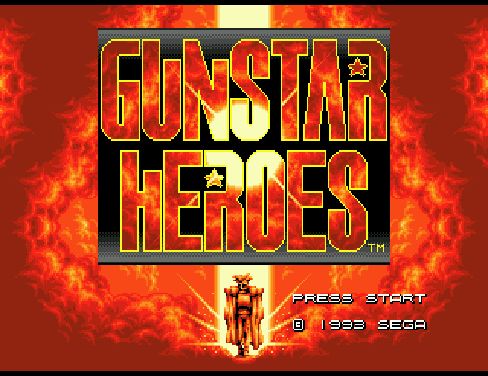 Look at those screenshots.  You’re looking at them and probably wondering what the hell is going on?  This my friends is Gunstar Heroes in a nutshell.  A balls to the wall action game that makes no apology for the sheer amount of chaos it thrown in your wake because it knows you have the tools to overcome all of it.  And eventually you will.  Not because it’s the point of the game but because the game is that damn good.

Developed by Treasure and released by Sega in 1993, none of us knew just what was about to hit us, partly because of Sega of America’s terrible marketing of the game.  They were too busy ramming god damn Sonic Spinball down our throat to bother rolling out the red carpet for a game that deserved to be put on a pedestal and personally, I know which one of the two deserved the marketing dollars.  But I’m going off on a tangent.

The Treasure logo upon booting up the game was unfamiliar, but would soon become associated with some of the most creative and technically brilliant action games the Genesis would play host to.  Comprised of former staff from Konami, elements of their previous work were very evident in terms of the graphical techniques they employed.  My first exposure to Gunstar Heroes came through the numerous spreads and accolades EGM heaped on the game throughout 1993.  I wouldn’t get the chance to play it until the very end of 93, where it won action game of the year from EGM.   Right away my expectations were high and when I finally got the chance to play it I was not disappointed.

The game gives you so many different attack options from the outset that it’s almost overwhelming.  Fixed or Free sh…….you know what I don’t know a single human being who has ever chosen fixed.  The weapon system is simple in appearance yet deep in implementation.  Each of the initial four weapons has specific properties; the flame is effective at close range, lightning passes through enemies, the Chaser is a homing projectile, and Force is the standard rapid fire pea shooter.

By combining any pair you can create a unique weapon that drastically more powerful and in some cases almost game breaking; homing lightning I’m looking at you.  That means there are 16 possible combinations available with weapon drops appearing frequently enough that you can experiment until you find a favorite.  In addition, hand to hand combat is also available in the form of jump kicks, belly flops, slides, and even throws.  To take it a step further in multiplayer you can even toss your partner!  Hell you can even throw a lot of the mini-bosses and end level bosses!  How fucking cool is that?

Most levels consist of brief encounters with cannon fodder enemies as you collect power-ups in between boss fights.  At times the screen will descend into utter chaos as all everything but the kitchen sink is thrown in your path.  Gunstar Heroes is not afraid to litter the playing field with enemies at a moment’s notice because regardless of the weapon(s) equipped you can clear them out in seconds with basic combat moves.  While the game attempts to overwhelm with numbers they are only an appetizer for the bosses.

Speaking of bosses, this would become a Treasure staple that still persists to this day.  No one does bosses like Treasure.  Almost an entire level, Black’s Dice Maze consists of a nonstop barrage of boss fights as you roll the dice to hopefully reach the end of the maze.  They like creating bosses so much they made a whole game out of them (Alien Soldier, someday I’ll get to it).   Each boss is imbued with a ridiculous amount of personality, and I like the rundown of what attacks they possess.  Literally almost every boss encounter is memorable, with Seven Force being the standout.  On normal you’ll see 3 of his different forms, but on hard you’ll experience all 7 in a test of reflexes and coordination the likes of which you’ve never seen before.

I mentioned earlier that the game throws a ridiculous amount of shit on screen at a time, but at no point does it ever feel cheap.  When you screw up you know it was your own fault, either from not being fast enough or choosing a bad weapon combination for the current situation.  The difficulty is tuned to near perfection.  The unlimited continues does make it fairly easy in that you can eventually brute force your way through the game but you’ll have so much fun that in the long run it won’t matter.  And you can always bump up the difficulty if you seek a worthy challenge.

Near perfection.  That sums the game up.  Graphically Gunstar Heroes pushes the Genesis hard and explodes with vibrant colors that are probably only rivaled by the Sonic series.  Some of the effects were never tested on that level of hardware before which makes Gunstar Heroes technical accomplishments all the more surprising considering this was Treasure’s first game.  The scaling effects are second to none and the multi-jointed bosses, although a staple of that era, animate beyond almost any game before it.  Aurally the music is right up there with the graphics. I love the second boss battle theme and the sound effects have some serious punch behind them.

I loved the 16-bit generation because developers pushed those systems hard, and Treasure definitely earned their place in the top 5 with their work.  And this was just their first game!  Truly indicative of what was to come.  Gunstar Heroes marked the beginning of Treasure’s legacy as a force to be reckoned with and is undeniably a classic that will make you look at lesser action games in disgust after experiencing the spectacle on display here.  Buy it now.