Trojan NES Game Cartridge
Trojan was released for the NES in 1987. It was developed and published by Capcom. The game was originally released for the arcades in 1986. The setting of Trojan is during a future that is post apocalyptic, which was caused from a nuclear war. The player will use a warrior that was hired to vanquish a dictator that is evil and the gang that follows him. There will be a shield and sword the player will be armed with, and the warrior also will have martial arts training.
Like the games Rush’n Attack and Kung-Fu Master, the player will be able to jump by pressing up on the NES controller instead of pressing a button. One button will be used for swinging the sword to attack enemies and the second button will be used for holding the shield for blocking attacks from the enemies. This will also include being able to block projectiles like arrows or throwing knives. While blocking with the shield, it is able to be held in front of the player while crouching or standing or upwards diagonally or vertically. If an enemy throws a magic ball at the player, it will cause a player to lose both their shield and sword if they try to block it. When this happens, the player will have to fight barehanded. The player can eventually recover the shield and sword after it appears on the screen at some point.
There will be a total of six levels the player will need to complete to beat the game, with each level consisting of the normal small enemies during the level, a mid level boss, and a main boss at a stage’s end. While playing through the levels, there will be floating hearts that will replenish a player’s health. There will also be jumping spots the player can use to jump higher than normal. The game can be started from any stage, but the player will need to complete the whole game again when the last boss, Achilles, is defeated to reveal the game’s true ending, like in Ghosts’n Goblins.
The version on the NES will feature many significant game changes, like hidden rooms and additional power ups. There will also be an alternate Versus Mode, having two players go against one another in a best two out of three rounds fighting match. This was the first attempt Capcom made in the game genre of fighting. The first player will control the game’s main character and the second player will take control of an enemy character having identical abilities to the first player’s character.
UPC: 0-09119-90073-7
Platform: NES
Players: 1-2
Condition: Used
Genre: Hack and Slash
Region: NTSC (North America)
Rating: Everyone 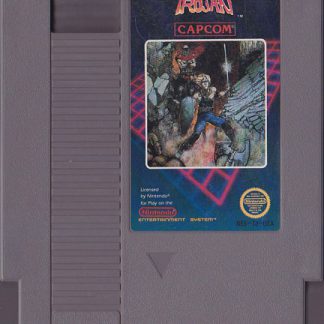