Little Nemo the Dream Master Nintendo NES Game Cartridge
Little Nemo: The Dream Master was released for the NES in 1990 and was developed and published by Capcom. The game is based on the film Little Nemo: Adventures in Slumberland, a Japan animation film, which is also based on a comic strip called Little Nemo in Slumberland. The game will revolve around a little boy in surreal dreams of his own, journeying to Slumberland, a realm of fantasy with strange beasts and dreamy type places. Nemo, the little boy, can ride specific animals lie a mole, gorilla, or frog, by feeding the animals candy. All the animals have their own skill sets that are needed to finish each level. The goal is to journey to Nightmare land and save Morpheus, the Slumberland king, from the grasp of the main villain, the Nightmare King.
The player will take control of Nemo while going through the platformer style levels. The goal of each level is finding a certain amount of keys that are scattered around the large levels in the game. The amount of keys that is needed per level is not known until the player reaches the exit, having a corresponding amount of locks. The player will need to go through every level platformer style, right and left but also down and up, looking for the keys. Through the levels are animals that will help Nemo with their powers after feeding them. Some of the animals are necessary in levels while others just make the levels easier to finish. The health bars for the animals differ from Nemo’s, with some having more health bars. Abilities like this are important since there are several challenging obstacles in the game with enemies being almost infinite, making Little Nemo as one of the hardest games for the NES.
UPC: 0-13388-11022-3
Platform: NES
Players: 1
Condition: Used
Genre: Platformer
Region: NTSC (North America)
Rating: Everyone 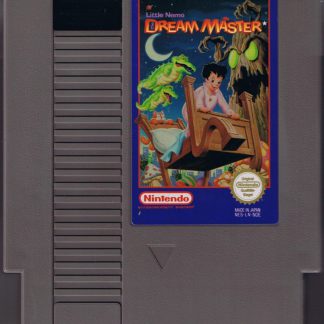