Kabuki Quantum Fighter Nintendo NES Game Cartridge
Kabuki: Quantum Fighter was released for the NES in 1991 in North America. Human Entertainment developed the game and HAL Laboratory published it. The gameplay of the game is a general platformer with single rooms and a boss in every level. The player will take control of Connor and use the long hair he has and weaponry that are chip based to attack the enemies inside a computer. The chip based weapons include a Fusion Gun and a Bolo that is remote controlled. The Bolo are acquired techniques that are copied from bosses defeated in each level.
The story is about Colonel Scott O’Connor who is 25 and an agent of the military. It was the year 2056 and an unknown virus appeared in Earth’s primary defense computer. Scott volunteers to partake in a transfer experiment that will convert his brain into binary code. He takes the image of his ancestor, a Kabuki dancer, because the computer will recognize his own great grandfather. The virus will take on actual properties of a real virus in a virtual world. It will leave behind debris, mutated creatures, and parasitic environments that have biological nature. In the last level, the player learns the that it is an alien type virus that a Hyperion probe picked up that was launched to another planet. O’Connor tries to stop the virus from firing a laser from the Hyperion and destroying the human race.
UPC:0-40458-23311-7
Platform: NES
Players: 1
Condition: Used
Genre: Platformer
Region: NTSC (North America)
Rating: Everyone 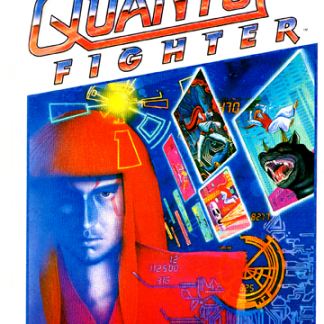