Dr Mario NES Game Cartridge
Dr Mario was released in 1990 by Nintendo for the NES and is an arcade-style puzzle game. Gunpei Yokoi designed the game and Takahiro Harada produced it. Hirokazu Tanake composed the soundtrack of the game. Mario take on the role of being a doctor and his goal is to destroy deadly viruses. This game has been remade, had a sequel, or has been ported to every single Nintendo console since it’s original release for the NES, with a lot of portable console releases beside those.
The players goal of the game is to destroy three different colored viruses, being yellow, red, and blue. You drop capsules with two colors into a bottle, which is the field of play. In a Tetris like style, players are to twist rotate and move the capsules right or left and to position them alongside viruses and other capsules that are in play. When there are at least four viruses or capsule halves that match color are positioned in a horizontal or vertical fashion, they get removed from the bottle. The player’s main goal is to get rid of all the viruses from the playing field, which is the bottle. If there are too many capsules and the bottle is filled up passed the neck, the game is over.
There are multiple grades of difficulty to choose from before you start a game. When starting, you choose a level between a minimum of zero and a maximum of twenty. This will determine the amount of viruses that need to be destroyed. There are also three different game speeds which will change how fast capsules fall into the bottle. Your score is based off of destroying the viruses and not time or capsules it took to clear the viruses. Once the highest level is completed, the player can continue to get a higher score, but the amount of viruses to destroy is the same from then on out. You can also get bonus points when you destroy more than one virus at once. Chain reactions do not give additional points however. The higher speed of the game, the more points you can get.
The game can be played with two players, with both playing on two separate bottles. Your goal is to destroy the viruses before your opponent does. When you destroy viruses or get chain reactions, this causes extra capsules to drop into the other players field. The best out of three games wins it all.
UPC: 0-45496-63062-1
Platform: NES
Players: 1-2
Condition: Used
Genre: Puzzle
Region: NTSC (North America)
Rating: Everyone 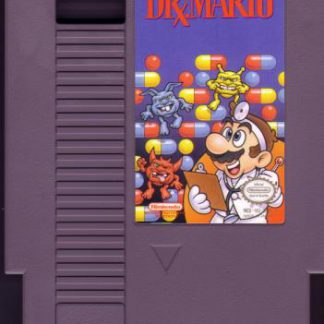