Balloon Fight NES Game Cartridge
Balloon Fight was released for the NES in North America in 1986, being developed and published by Nintendo. It was originally released for the arcade on a Nintendo Vs System. The play is similar to the game Joust made by Williams Electronics.
The player takes control of a Balloon Fighter that has two balloons connected to the helmet on his head. The player can have make his Balloon Fighter flap both arms by pressing A or holding down B on the NES controller. The character will have a decrease in flotation if a balloon is ever popped, which will make it harder to go up. If both of the balloons get popped by the enemies, a life will be lost. A life will also be lost if a player falls in water, a big pirahna close to the water surface, or if the player gets hit by some lightning. The game has two modes, which are the 1/2 player game, which has the player clear enemies on the screen, and the Balloon Trip mode, which has the player dodge objects in a platformer stage.
The 1/2 player game mode can have two human players simultaneously, where they will need to beat all enemies on the screen for each stage. Both players will begin with three lives. The enemy Balloon Fighters will be floating around and the players or player will need to pop their balloons in order to beat them. The enemies can also be destroyed when they hit water or when a pirahna eats them. If an enemy is killed or falls in water, they will turn into a bubble that can be collected for points. As the player progresses through stages, the amount of platforms and enemies increase. Bonus stages will appear every few stages, with the goal being to burst every balloon that floats up from chimneys from the bottom screen. The Balloon Trip mode is one player and has them avoiding lightning sparks and collecting baloons trying to go up ranks to compete for the highest score. The player in this mode alos starts with a single life.
UPC: 0-45496-63020-1
Platform: NES
Players: 1-2
Condition: Used
Genre: Action and Adventure
Region: NTSC (North America)
Rating: Everyone 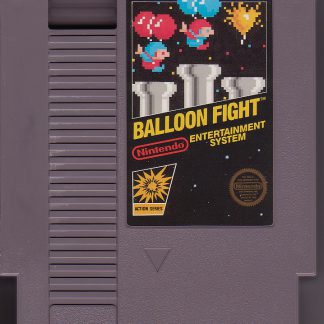