Chip n Dale Rescue Rangers NES Game Cartridge
Chip n Dale Rescue Rangers, a platformer game, was developed by Capcom and is based on a Disney Cartoon with the same title. It was released on the NES in 1990 for North America and Japan, and Europe received the game a year later. The story goes that the Rescue Rangers go on a specific mission to find a missing kitten for a little girl. Gadget starts to search the area ahead of the group while Monterey Jack was sent to explore sightings of mechanical dogs with his fly friend Zipper. Chip and Dale end up in a laboratory later and get attacked by some crazy robot. When the robot is defeated, Fat Cat comes and shows that the girl’s kitten was a diversion for his real plan, which was to capture Gadget and make her work for himself. Gadget was able to get a hold of Chip n Dale by making a wireless communicator and sending them a map by a pigeon. The map shows them where Fat Cat’s gambling club is, which is where Gadget is located. When she is rescued, she gives the chipmunks a rocket that will fly them straight to Fat Cat and his hideout where they can beat him.
The game features a single and two player mode. You can choose what levels to go to using a map of certain locations within the city, a similar format to another Capcom game like Bionic Commando. As you play through the level, you can jump, walk, duck, and lift objects like acorns, barrels, balls, and crates to throw towards enemies including bosses. Both characters get three hit points before they die, and no passwords are in the game. In a two player game, player one is Chip and player 2 is Dale. Monterey Jack occasionally appears to break certain blockades in your path, while Zipper will give you invincibility whenever he is found in the level. Gadget will give you advice for each stage even though she is being held captive.
UPC: 0-13388-11020-9
Platform: NES
Players: 1-2
Condition: Used
Genre: Action, Platformer
Region: NTSC (North America)
Rating: Everyone 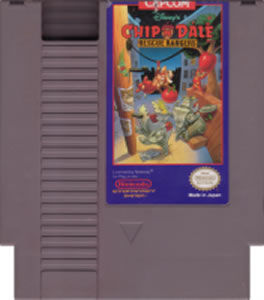