BurgerTime NES Game Cartridge
BurgerTime was created in 1982 by Data East for acrades. It later was released for the NES in 1987 along with other gaming platforms. In 2003, Data East went bankrupt, and G-Mode purchased most of their, which included BurgerTime and its spin offs Burgertime Deluxe, Peter Pepper’s Ice Cream Factory, and Super Burgertime.
The goal of Burgertime was to finish hamburgers while running away from enemies, which were foods like creatures. Peter Pepper, the main character, needs to walk across an ingredient to have it fall down a level. If there is a diferent ingredient beneath it, it knocks that one down a level, etc. You finish a burger once every ingredient has fallen down onto a plate underneath the level. The level is competed once all burgers have been made. The three enemies are a hot dog, a pickle, and an egg. You can smash an enemy with an ingredient, or have the enemy fall by leading them on an igredient and the making it fall. If the enemy falls while on an ingredient, the ingredient will drop an extra couple levels. Enemies can also be dodged or stunned, and respawn in the level after a couple seconds if they were smashed or fell. You get more points for dropping enemies rather than crushing them.
Peter Pepper can shake shots of pepper on close by enemies to have them stunned and they will not hurt you for a short amount of time.You can get more shots by collecting extra foods throughout the level like french fries or coffee. The extra foods appear when you have dropped some ingredients. The game also has six screens to play on, which get harder with each new screen you play on. The new screens will have more enemies and more burgers, a harder layout to travel across, or burgers with more ingredients. Once all six screens are finished, you go back to the first one and restart the cycle.
UPC:
Platform: NES
Players: 1-2
Condition: Used
Genre: Platformer
Region: NTSC (North America)
Rating: Everyone 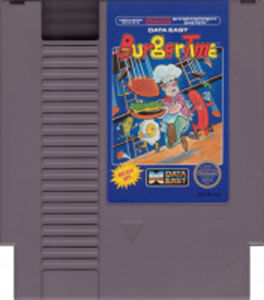