Desert Commander NES Game Cartridge
Desert Commander was released for the NES in 1989. It was developed and published by Kemco and is a tactics game that is turned based. The player will choose Allied Forces or Axis Powers with the factions not being named and the whole conflict stayed opaque. The story is about World War II when Adolf Hitler, the German army’s leader, invades Poland with the blitzkrieg technique. France then formally surrendered, which made Nazi Germany Continental Europe’s strongest nation. Fascist Italy’s dictator Benito Mussolini signed an alliance with Germany during that time. He was going to use this as an opportunity of transforming the Mediterranean into the Italian Lake. The Axis forces had managed delivering invading troops into Egypt sometime in September of 1940. Italy’s army, however, was defeated by British counterattacks having the duty of protecting Egypt. Germany was then determined on helping Italy win it’s conflict while they prepared to invade the Soviet Union simultaneously.
The player will have a force that will have nine different unit types and a headquarters unit. The HQ is considered a unit itself and can attack if needed. Every scenario will give different set numbers of units the player can use and will be able to mix and match the different types without exceeding that limit. While in single player, the player can use the second NES controller to modify CPU forces. When playing the CPU, they will have different unit ratios than the player to command. On the game’s easiest scenario, the CPU and player will have an identical number of units. All the other scenarios gives the CPU more units than a player. The AI has no variance, therefore the later maps are harder only because the CPU will have a larger amount of units.
Gameplay will be turn based and will not have a time limit. The game’s objective is destroying the enemy headquarters. The first one to do so wins. The units will have different mobility ranges, which will all vary and depend on the terrain and unit type, excluding air crafts. They will also vary in shooting distance, with the distance being fixed and will not depend on the terrain. Every unit type will have limited fuel and ammunition. The player can replenish these by landing the units onto the correct buildings or they can be replenished with supply trucks. An example is all the air crafts will need to stop at airports to replenish ammo and fuel supply. Specific units will be either weak or strong against specific opponents, and will have an average performance against all other types of units.
UPC: 8-33031-76313-8
Platform: NES
Players: 1-2
Condition: Used
Genre: Strategy
Region: NTSC (North America)
Rating: Everyone 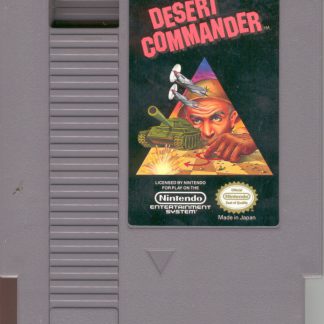