Strider NES Game Cartridge
Strider was released for the NES in 1989. It was developed and published by Capcom. The game takes place in 2048, a dystopian type future. It centers around Striders, a organization kept in secrecy that consist of high tech ninjas that are operatives. They specialize in different wetworks like disruption, demolitions, kidnapping, and smuggling. The player will take control of the main character Hiryu, who is the youngest elite Strider ever in their organization. The organization’s second person in command, the Vice Director Matic, summons Hiryu to find and assassinate Kain, Matic’s friend, because he was captured by the hostile forces, thus becoming the Striders liability. Hiryu decided he is going to try and rescue him instead.
The NES version of Strider is different than the version in the arcade in that you will need to find items and clues to progress. The game will open on Blue Dragon, the Striders’ operations base, with Hiryu transporting to a variety of areas around the world. Kazakh is the only available area at the start of Strider, with other areas unlocking later like Africa, China, and Egypt when the player collects disks, which contain information that is important to the game’s plot. They are provided by characters that also will grant Hiryu newer abilities. The new abilities will unlock previous areas that were impassable, which will force backtracking by the player to get new disks and items. The player can get back to Blue Dragon by returning to the start of a level and jumping into the upper left corner on the screen.
Every area in the game will have elevator like transports that are tubes which can be entered from underneath by jumping into it or from above by crouching down. The player is then moved along a path that the tube follows until reaching an exit. Some tubes can be entered from both ends and some are only one way. There are also some tubes that are one way &nbsp;and will send Hiryu back to an earlier part in a level or an entirely different level, with no way to get back conveniently.
The player’s main weapon is a Cypher, which is a blade that generates plasma and has a handle that is tonfa like and is called the Falchion. He uses the Falchion to slash the enemies or stab the enemies from below when raising the weapon up. Some areas of the game will make it necessary to jump off the walls to get to areas that would be impossible to reach otherwise. The player’s strength level increases when accomplishing specific mission objectives like capturing an enemy officer. The level increase will extend Hiryu’s energy and health meters, with the energy meter enabling him to use skills acquired in the game. These skills will include health recovery, attacks, or an ability of warping back to Blue Dragon instantly. A technique available for the player is using the Plasma Arrow which is a projectile attack. To use this attack, Hiryu raises his Cipher and keeps it in the air until it starts to flash. When this happens, a bolt can shoot from the sword by pressing the button for attacking.
Passwords are provided for keeping track of progress. When a password is requested, the game will end with a short description of the player’s progression, which will depend on the level of Hiryu. It will then give a title for the next adventure, which is similar to an anime.
UPC: 0-13388-11013-1
Platform: NES
Players: 1
Condition: Used
Genre: Platformer
Region: NTSC (North America)
Rating: Everyone 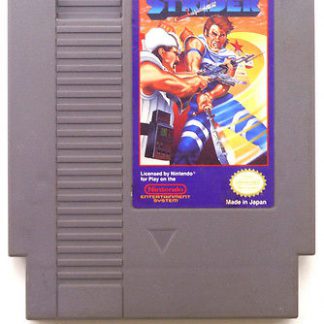