Heavy Shreddin NES Game Cartridge
Heavy Shreddin was released for the NES in 1990. It was developed by Imagineering and published by Parker Brothers. The game will have three mountains the player will need to overcome to finish the game. While the player descends a mountain, it’s terrain will become increasingly difficult for navigation. The three difficulty degrees on every mountain are novice, which is marked with a circle, intermediate, which is marked with a square, and expert, which is marked with a diamond. The player will begin with 4 lives. The game will have five events with 18 total levels to play. To proceed to another event, the current event being played will need to be completed successfully. A life will be lost if the timer runs out or if a player falls. Bonus lives will be given to the player when a trail is completed. The game will be finished once every trail and all events have been completed.
There are many ways the player can score points while playing the game. Ways to score points are avoiding objects like flags, trees, etc by sliding down or up, performing tricks, or jumping off ramps and other types of elevated terrain.
The first event is the Downhill, where the player will need to avoid falling or hitting objects. This event will be timed so taking too long will send the player back to the slope’s top. The same will happen when colliding or falling. The second event is the Slalom. The player will need to go through flags that were placed on the slope. If a player does not get between flag pairs they will go back to the mountain top. The third even is the Half Pipe. This event will be all about getting points. Speed will need to be gained so the player can perform tricks on the half pipe’s peaks on either side. The fourth event are Moguls. This event will require to perform tricks while jumping over moguls, which are snow bumps. The fifth event are the Backwoods. This event will be a mix of tricks, speed, and survival. It will test everything the player learned while playing the game, making the event very difficult.
UPC: 0-73000-04601-9
Platform: NES
Players: 1
Condition: Used
Genre: Sports
Region: NTSC (North America)
Rating: Everyone 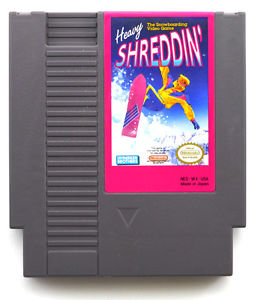