Knight Rider NES Game Cartridge
Knight Rider was released for the NES in 1989. It was developed by Pack In Video and published by Acclaim. The game will feature fifteen cities that starts at San Francisco and will end at Los Angeles. The player’s car, KITT, is able to upgrade with better shield capabilities and more fuel. The top speed can also be upgraded along with the amount of missiles/lasers the player starts with. Missions one through six will have allies that are represented with Knight trucks that will give the player power ups.
In the mission mode, terrorists raided a United States military site. Only the player and their robotic car will be able to chase them cross country in the U.S. to put a stop to their plan. The time limit will put pressure on a player while they attempt to beat the forces of the terrorists. Three types of vehicles are in mission mode. Red vehicles are enemies, blue vehicles are civilians, and yellow vehicles are enemies carrying power ups. KITT will have a structural shielding. The vehicle, however, will be destroyed if the player keeps crashing or if the shielding is depleted from enemy gunfire. Though the tv show had a non violent premise, the mission mode uses firearms to enhance the gameplay, being similar to the game RoadBlasters. Shooting the blue civilian vehicles will deduct the timer and make completing a level harder. After each third level, a password will be offered by Devon that the player can use to continue the game from the last point played.
Players will be able to lose a life multiple ways. These ways are if their vehicle runs out of gas, their car gets destroyed, or if the timer runs out. Sometimes an ally will give a player extra gasoline, extra shields, or extra time on the clock. Discriminating between between allies, civilians, and enemies will be important. Losing a life will be possible in the drive mode and the normal mode. Unlike racing games, the speed will not be important. It will instead emphasize on the player having the capability to make a journey from a level’s beginning to it’s end and not run out of gasoline for their vehicle or having too much contact with other vehicles. The drive mode mentioned earlier will allow a player to just drive around through the stages in the game without any weapons and without enemy fire.
UPC: 3-61622-01111-0
Platform: NES
Players: 1
Condition: Used
Genre: Racing
Region: NTSC (North America)
Rating: Everyone 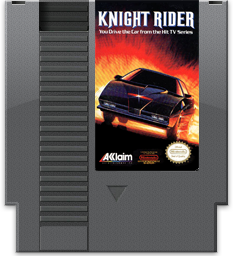