Super Team Games NES Game Cartridge
Super Team Games was released for the NES in 1988. It was developed by Sonata and published by Nintendo. The game makes use of Nintendo’s Power Pad. It will use side B of the pad. For the player to control their character, they will need to use the NES Power Pad to run in place to make their character run and jump to have their character jump. During the basic gameplay, the player will need to jump and run their way to a finish line quickly. There will be some additional variations of the game available. The first is belly bump ball, which has the player roll a large ball through an obstacle course when running into the ball. The second is crab walking, which has players walk like crabs to a finish line. The third is water cross, which will put water on a track, and if the player mistimes their jump and land inside water, they will have to swim, costing valuable time. The fourth is bubble run, which has the player race through a course while inside a large bubble. There is also a skateboard race.
If the player chooses to play against computers, there will be three different opponents, with each having different attributes. Ollie will be the easiest for a player to defeat, making him the best choice for any newcomers. Jimmy will be faster than Ollie, making him harder for a player to defeat him. He will be the game’s medium difficulty. Jack will be the hardest of all three characters, so only players with experience should attempt defeating him. There will also be some cooperative games included in the game which include a relay race, tug of war, and a six legged race.
UPC: 0-45496-63045-4
Platform: NES
Players: 1-2
Condition: Used
Genre: Sports
Region: NTSC (North America)
Rating: Everyone 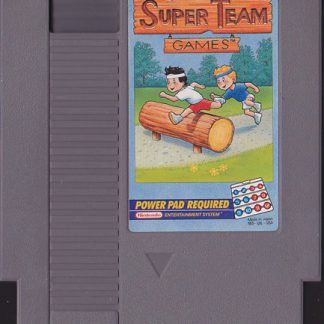