rick Shooting NES Game Cartridge
Barker Bill’s Trick Shooting was released for the NES in 1990. Nintendo published and developed the game. It was based on an animated show called Barker Bill’s Cartoon Show that Paul Terry created in 1952. The game will consist of four games of the carnival type that a player will use the NES Zapper for to shoot a variety of objects to obtain points. The more daring the player is with their shots, the higher the scores they will be given. The ones on a verge of breaking or disappearing will award the most points. There are multiple game modes the player can choose from.
During the Balloon Saloon, the player will attempt to shoot down balloons that are flying away while trying to avoid shooting the dog that appears in the game Duck Hunt. Each balloon will be worth 100 points. While playing Flying Saucers, Barker Bill along with Trixie, his assistant, will throw plates across the game screen. The player will need to shoot the plates and avoid shooting Trixie, Bill, and their parrot. The amount of points the plates give will depend on how close a plate gets to the ground, with a plate that is high up being worth 100 points and a plate right near the ground being worth 500 points.
While playing Window Pains, assorted objects fall down the screen, which is full of windows. Some windows, however, will be closed which will block a player’s shots. The player will only be able to hit an object through an open window. The hits will be scored according to which row an object is shot, with 100 points being given from the top and 500 points being given from the bottom.
With the Fun Follies, it will involve progression through the past three games in turn and is followed by two more stages. The first is Trixie’s Shot, which is first seen during stage 4. Trixie will walk around the game screen and will sometimes present coins. The player will need to shoot the coins and avoid shooting Trixie or her parrot. The points will range from 100 points to 500 points and will depend on how fast they are shot after the coins are presented. Any of the coins Trixie tosses away will always be worth 500 points.
After Trixie’s Shot, assuming at least a single diamond was obtained, the player goes to the slot machine. There, the player will pull a trigger to have the slots stopped. This will be the only way to acquire extra chances during fun Follies. The diamonds the player collected during the earlier stages, but will not give them extra chances during Fun Follies, will allow more lines for winning and a higher chance of getting a big prize. A player will be awarded for every winning line, which will allow the potential, with a minimum of two diamonds, of getting a total of an extra 15 chances.
During Bill’s Thrills, Bill throws objects like tomatoes and eggs really high, and then come down on top of Trixie. The player will need to hit the objects before they land on Trixie. Again, the player will need to avoid shooting the parrot. The scoring during this game will be higher because of the difficulty and will depend on the object’s size that is thrown. The points will range from 800 for a large tomato to being 1500 for a tiny egg.
Every game will be started with the player having ten chances, with the exception while playing Fun Follies, which gaining a life will require shooting one diamond. A player will lose a chance when a target is failed to be hit and when they hit the wrong object like an animal or a person. When all the chances are gone, the game will be over.
UPC: 0-45496-63055-3
Platform: NES
Players: 1
Condition: Used
Genre: Shooter
Region: NTSC (North America)
Rating: Everyone 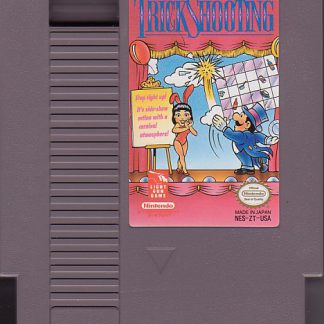