Hogan’s Alley NES Game Cartridge
Hogan’s Alley was released in 1985 in North America for the NES, and used the light gun for the controller. It was also a part of the original 18 launch games for the NES. There are cardboard cutouts of innocent civilians and villains, and the goal is to shoot villains and avoid the innocent civilians.
Camp Perry was the location of a Special Police School with a shooting range called Hogan’s Alley, which was a facility to train people going into the National Guard. It was shut down when World War II was going on. About three years after the Hogan’s Alley game was released, the FBI Academy that was at Quantico, Virginia created a simulated town of Hogan’s Alley to use for training purposes.
The three modes of play are Hogan’s Alley A, which has a blank wall, Hogan’s Alley B, which has a town, and Trick Shot, where you shoot cans to get them to bounce onto ledges. The player begins with 3 cardboard cutouts that move into position along a wall and turn to face you. Cutouts will have a variety of villains and civilians. You will need to react fast and make sure to only shoot the villains and no civilians. The back wall starts blank, but then changes to a block on a city in the later rounds. Five cutouts instead of three are in each of these later rounds. When the player completes five rounds, they get a bonus round. You have limited ammunition to use to shoot ten cans that are thrown from the side screen onto ledges on the opposite wall for points. Regular rounds will continue after this bonus round, and at an increased speed. If you shoot a civilian or you don’t shoot a gangster, you will lose a life, and no lives can be lost during the bonus rounds. It’s game over when you lose all your lives.
UPC: 0-45496-63003-4
Platform: NES
Players: 1
Condition: Used
Genre: Shooter
Region: NTSC (North America)
Rating: Everyone 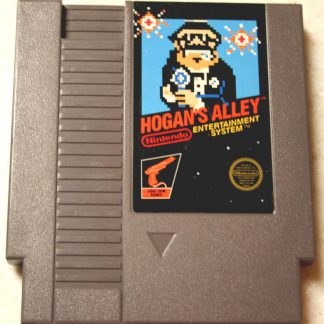