Pin Bot NES Game Cartridge
Pin Bot was released for the NES in 1990 and was based on a pinball machine with the exact name. The NES game accurately reproduced some aesthetics and gameplay of the original pinball machine along with introducing newer features and some added challenges. The game has been praised for the pinball machine’s music, general gameplay, and artwork being faithfully renditioned. Synthesized speech for the Pin Bot is played but gameplay will be interrupted when the phrases it speaks are played back. The sound effects, speech, and music can all be toggled off and on in the pause menu, which can be accessed with the second NES controller, since the Select and Start button are for nudging the machine on the first NES controller.
The main objective of the game Pin Bot is scoring points by completing objectives and hitting targets. The rules are similar to that of real pinball. The player will begin with a marker lit that is set on the planet Pluto and will advance by hitting lit targets, going through the solar system. When the player reaches a planet with a flashing checkpoint, which are Mars, Jupiter, or Saturn, they will earn an extra ball. Getting to the Sun will also award an extra ball. A grid that is 5×5 will sit in front of the Pin Bot visor. There will also be two target banks at the top and on the side of the grid, which will let the player light one unit or two units on the grid. When the grid becomes completely lit up, the visor will open and allow the ball to be locked by the player. When a second ball is locked inside the visor, it will start a multiball mode with two balls, doubling the points scored. A ball can then be relocked and the player can shoot the second ball into the Solar Ramp and collect a score bonus.
When the Solar bonus is successful during the multiball in the NES version, the playfield is changed, with six different playfields available. The shapes of the playfields are the same as with all the targets, but the color scheme will change and newer enemies will appear after the first level. Level 2 will introduce a blob advancing through planets. When it gets it gets to the top of the lamp, it will attempt sucking in the players ball and eat it then spitting it. A plane will start to fly around the playing field in level 3 that will sometimes have a missile that will drop when the plane gets destroyed by a ball or it disappears by itself. If the missile reaches a flipper, it will damage or destroy it. In level 4, the same plane will be able to catch a ball and carry it off. Both level 5 and level 6 have a snake that will makes an appearance in the outer lanes and will attempt to grab a ball and pull it to the outer lane. In every case when a ball is taken by one of the enemies, the player can defeat them when repeatedly shake the machine.
Not only can the playing field change, but level advancements and certain bonuses will cause a ball to transform into a triangular wedge from the original sphere shape, and then changes from the triangular wedge into a cube. Every time the cube changes shape, the ball will become faster and harder to control. All ball shapes will move the same with no physics altering.
UPC: 0-45496-63051-5
Platform: NES
Players: 1-2
Condition: Used
Genre: Other
Region: NTSC (North America)
Rating: Everyone 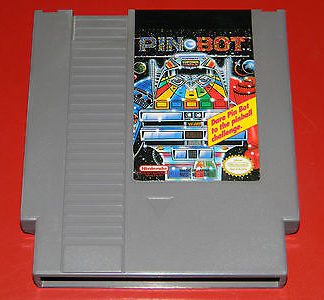