Skate or Die NES Game Cartridge
Skate or Die! was released for the NES in 1988. It was developed by Konami and Ultra Games published it. The players compete in skateboarding events, having five, sequentially or individually. The game can played with eight players. Don Traeger, the producer who came up the idea on the game, was inspired by another skateboarding game called 720 Degrees. The game was well liked and spawned a winter sequel called Ski or Die and an actual sequel called Skate or Die 2.
The two events with a ramp are high jump and freestyle ramp. The two events in downhill are downhill jam, which is set on a street, and downhill race, which is set inside a park. There is also a pool joust. Both ramp events are single player and downhill race, downhill jam, and pool jousting are all two player. All events are decided with a point system. The game had four characters that were featured. Rodney Recloose is a really wild man that has a purple mohawk and a tattoo of the Marine Corps. He also runs the skate shop and has facial resemblance to Rodney Dangerfield. Bionic Lester, his son, is more wild and has a flattop that is green. The player could take them both on in downhill jam and jousting. Poseur Pete will challenge beginners and then Aggro Eddie will take on the intermediate players, which leaves Lester with advanced pros.
UPC: 0-83717-12002-5
Platform: NES
Players: 1-8
Condition: Used
Genre: Sports
Region: NTSC (North America)
Rating: Everyone 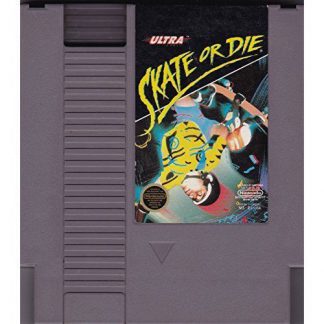