Jeopardy Junior Edition NES Game Cartridge
Jeopardy! Junior Edition was released for the NES in 1988. It is a kids edition of the game Jeopardy! with the puzzles being easier. There are approximately 2000 "answers" in more than 400 categories.
UPC: 0-43948-52001-8
Platform: NES
Players: 1-2
Condition: Used
Genre: Other
Region: NTSC (North America)
Rating: Everyone 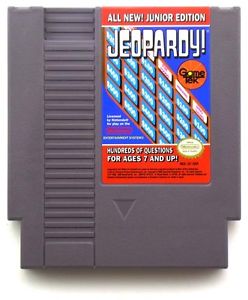