Golf NES Game Cartridge
Golf was developed and produced by Nintendo and was released in 1984. It’s a game simulating the sport of golf. The man the player uses to golf resembles that of Mario. It was also the first to have a power/accuracy meter for when the club is being swung.
The game can be played with two people. The first player wears white shoes and shirt with pants that are blue, and the ball is also white. The second player has red shoes and shirt and pants that are black, and the ball is red. The player can choose to play single stroke or doubles stroke and match play for two players. There are a total of 18 holes in the game to play.
UPC: 0-45496-63010-2
Platform: NES
Players: 1-2
Condition: Used
Genre: Sports
Region: NTSC (North America)
Rating: Everyone 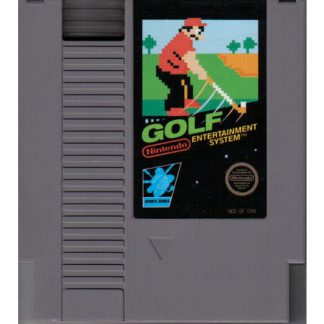