The Goonies II NES Game Cartridge
The Goonies II was released in 1987 for the NES and was published and developed by Konami. The adventure game is a sequel to the first Goonies game that was in Japan for the Family Computer and was only available on arcade units in North America. Many people have thought that it was supposed to be a game based off a sequel to the Goonies movie that was cancelled, which has yet to be produced.
The game revolves around the character Mikey. The Goonies have been captured by the Italian family the Fratellis, who are counterfeiters and crooks. Mikey goes on a journey to rescue his Goonie friends and free Annie, a mermaid. The game has two modes to play on, which are first person and platform. The majority of the game is played in platform mode on a non linear map. The player will move Mikey to other areas by using ladders and doors that could act as warping zones. Many different zones are in the game, each having their own enemies, music, and graphics.
The player can use a variety of weapons, and has a primary and secondary. The three primaries are a yo-yo, which is short range with minimal power, a slingshot, which is ranged with ammunition, and a boomerang, a slow ranged weapon that has unlimited uses. The two secondary weapons are a molotov cocktail and a bomb. The amount you can carry of the secondary weapons can increase by finding cases placed throughout the game. Both are exploding weapons and Mikey can get damaged by being too close to the radius. Mikey can also get performance enhancing shoes. His jumping ability can be increased with spring shoes and are needed to reach certain parts of the game. His speed increases when you find hyper shoes and makes some places easier to access. Certain important items in the game must be found by obscuring. The candle can only be obtained when Mikey attacks a specific older woman, and you must hit her five times repeatedly, for no reason.
UPC: 0-83717-11006-4
Platform: NES
Players: 1
Condition: Used
Genre: Action adventure, Platform
Region: NTSC (North America)
Rating: Everyone 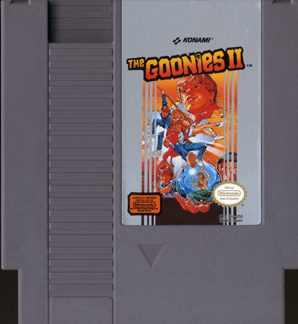