Karnov NES Game Cartridge
Karnov was released for the NES in 1988. It was developed and published by Data East. It was Data East’s mascot debut, Karnov. The player will take control of the game’s protagonist Jinborov Karnovski, with Karnov being used for his short name. He is a popular strongman that is illustrated to be from somewhere in the Central Asian republic in the Soviet Union. He was introduced in other games by Data East which includes Bad Dudes Vs DragonNinja, playing the first level’s boss. Karnov would later appear in Karnov’s Revenge made in 1994 for the Neo-Geo. Karnov’s Revenge is not the sequel to Karnov. It is, however, the sequel to a game called Fighter’s History, which was a head to head fighting game with Karnov as the last boss.
The game will put the fire breathing, bulging muscled, former circus strongman hero from east Russia on a journey through nine levels, searching for treasures. On the journey, between Karnov and all the treasures, are some horrendous monsters which include skeleton warriors that ride ostriches, fish men that hop, djinn, dinosaurs, and monks that wield swords. Karnov will be able to withstand two hits. If the player is hit once, Karnov will turn blue in color, indicating he still has a hit left. He can get the hit back when the player grabs blue fireball orbs. Other items the player can find are shields, clappers, boomerangs, ladders, and bombs. The player can also find boots that will increase Karnov’s jumping height, wings to have him fly, and scuba gear to let him go underwater.
The player can have Karnov jump, walk, and shoot through the levels and locate special items for helping him on the journey. The player can also collect the red orbs that will upgrade to be able to fire three fireballs simultaneously. Every level will have various strange enemies, like hopping warriors, centipede women, will o wisps made of rocks, tree monsters, and gargoyles that the player will need to avoid or destroy. When reaching a level’s end, the player will usually fight a boss or multiple bosses that they will need to defeat to complete the level. This will also give the player a new treasure map piece. In every level the player can collect various items, some that can be used right away and some that will need to be used at specific times. In the last level, the player will face a dragon with three heads named Ryu.
UPC: 4-73109-75894-1
Platform: NES
Players: 1
Condition: Used
Genre: Platformer
Region: NTSC (North America)
Rating: Everyone 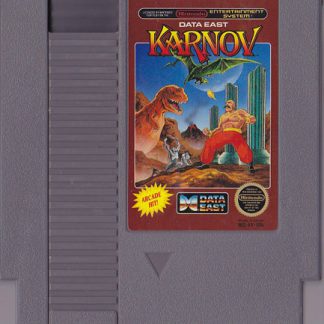