John Elway’s Quarterback NES Game Cartridge
John Elway’s Quarterback was released for the NES in 1989. It was developed by Rare and published by Tradewest. It was originally an arcade game called Quarterback back in 1987, before John Elway endorsed it in 1988. The controls will be different for the right and left sides, defense and offense. When the possession changes, the player will switch sides and gameplay will continue. A playbook will be available for the player to select plays and formations for defense and offense. There will be nine plays for the offense to choose, most of them being passing, and six plays for the defense to choose. The view will be a top down with vertical scrolling. One team will have blue uniforms and the other team will be wearing red uniforms. Teams will have nine players for both.
While playing on the offense, a player will have the option to select a normal play that is almost impossible for defenses to stop once performed correctly. For the player to choose that play, they will need to highlight it in the menu for play selection and then have the timer run out. During the normal play, a player’s quarterback will need to pass the football quickly so they can avoid a sack since the player’s offensive line will collapse very quick in the play’s formation. When the football is released, all the receivers will run to the football. If the football is caught, a receiver will be able to run extremely fast, making a receiver almost impossible for a defense to tackle and catch up to. The game can be played with one player vs a computer or two players one on one.
UPC: 0-31719-19884-9
Platform: NES
Players: 1-2
Condition: Used
Genre: Sports
Region: NTSC (North America)
Rating: Everyone 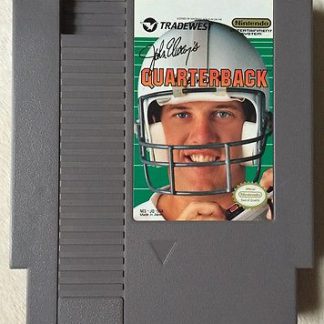