Smash TV NES Game Cartridge
Smash TV was released for the NES in 1991. It was originally an arcade game released in 1990. The game is a sequel to Robotron: 2084. On the NES version, the player would have the choice of using the D-Pad on controller two for changing their characters shooting direction. A multitap was required for both of the players to have this option.
The gameplay has similarities to the first game in the series Robotron: 2084. The game’s theme was borrowed form the movie The Running Man, which had the players competing on a game show that was violent, being set in the year 1999. To be able to move onto the next arena, the player would need to shoot and kill enemies in hordes that will come from all sides of the screen. The player will collect weapons, items that power up the player, and a variety of bonus prizes. This eventually lead to a last showdown with the host of the show, finally getting the main prize of freedom and life. The game will have keys through the levels and if enough are collected, a bonus level called Pleasure Dome will be accessible by the players.
UPC: 1-06067-02148-1
Platform: NES
Players: 1-2
Condition: Used
Genre: Run and Gun
Region: NTSC (North America)
Rating: Everyone 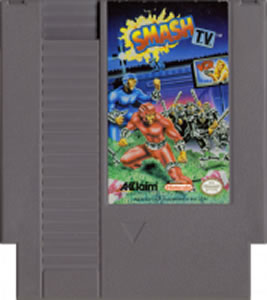