Spelunker NES Game Cartridge
Spelunker was released for the NES in 1987. It was developed by MicroGraphicImage and published by TOSE. The game was also released for the arcades in 1985. In 1987, a sequel for the arcades was released in only Japan. There was also a downloadable remake titled Spelunker HD that was released for the PS3. It was a remake of the NES game, having HD graphics along with 100 levels, ten large caves having ten levels a piece. A sequel called Spelunker World was released in 2015 by Square Enix for the PS4.
The game’s setting is inside a massive cave, having the player start at the entrance of the cave’s top. The objective of Spelunker is getting to the treasure at the cave’s bottom. To get there, the player will need to jump and walk through the cave that gets increasingly more challenging. The player will also have to work with a limited amount of air, but it can be restored at certain points. The cave will be split into six different levels. Even though the levels will connect to one another seamlessly, forming a large single map, there will be clear signals from the game at specific points showing the next level’s name and giving a bonus to a player that will consist of a varying number of points and another life. Also, the game’s next couple levels are loaded from the disk at the point, depending on the memory.
The hazards in the cave will include bats that drops deadly guano onto the player and the ghost that haunts the cave that appears at random and attempts to take a player into shadow world. A player is able to shoot blasts of air toward the ghost to push it away. This, however, will render a player unable to move for a short time, making them vulnerable to dangers and depleting their supply of air further. The objects the player can collect will include flares, keys, and dynamite sticks. Precision when positioning for jumps will play a key factor in finishing the game successfully.
UPC: 0-47956-11840-3
Platform: NES
Players: 1
Condition: Used
Genre: Platformer
Region: NTSC (North America)
Rating: Everyone 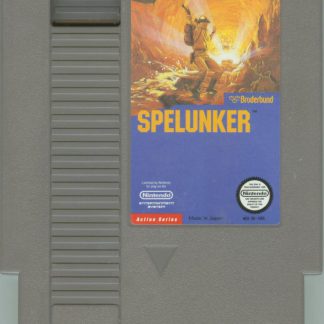