Castlequest NES Game Cartridge
Castlequest was released for the NES in 1989. ASCII Corporation developed the game and Nexoft Corporation published it. In the NES and Family Computer versions of the game, every room will be wider than the game screen, which will have the display scroll horizontally while moving. Because of different sizes of rooms, adjustments were made on their layout. The save and load featured has been removed from the NES version, but the player will start with 50 lives instead of the normal 4, with two magic fairies that will help. The player can also attack with their dagger or sword in the NES game, but is limited due to the enemy having to be in close proximity to kill them. This will put the player at risk of dying themselves since timing will be crucial.
The goal of Castlequest is navigating through the Groken Castle and saving Princess Margarita. Objects can be pushed by the player during gameplay to progress through the levels. In some rooms, advancing will require the player to align Elevator Controlling Blocks, Candle Cakes, Honey Jars, and Cement Blocks. This can be time consuming in some of the rooms since the player is able to open only a certain door if standing by it. This means the player cannot jump and enter a door in the air while jumping. The player will also need a key that will match the door’s color to be opened. A map can help the player navigate. It is obtained in the game’s first room. The map has a 10×10 matrix of the rooms and highlights the room the princess is in. Enemies like Phantom Flowers, Attack Cats, Fire Spirits, Wizards, Bishops, and Knights will need to be avoided.
UPC: 0-93992-01000-3
Platform: NES
Players: 1
Condition: Used
Genre: Action and Adventure
Region: NTSC (North America)
Rating: Everyone 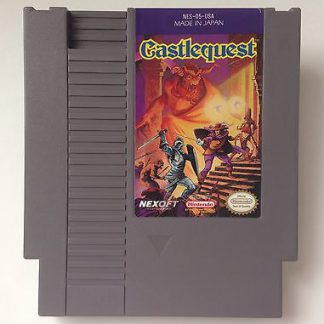