Dragon The Bruce Lee Story SNES Game Cartridge
Dragon: The Bruce Lee Story was released for the SNES in 1995. It was developed by Virgin Interactive and published by Acclaim Entertainment. The game was based from the movie having the same name, which is a somewhat fictional account of Bruce Lee’s life.
The player will take control of Lee and will need to defeat a sailor from a Hong Kong dance, chefs from a Chinese Restaurant located at San Francisco, master of martial arts who challenge Lee, and others to progress in the game. It will recall action scenes that were in the movie. The game, however, leaves out important story information that was in the movie and also a lot of the romance scenes between Bruce Lee’s future wife and himself.
The player is able to use various moves from martial arts to defeat enemies and build their chi meter. The chi meter will allow the player to use special moves on opponents. There will be a total of three continues to use and if they are lost, the player will need to fight an enemy called The Phantom, who is Bruce’s personification of fear and will change into a Japanese Samurai that is armored, to continue. Phantom, however, is close to invincible. The player will fight Phantom Samurai again at the game’s end as the final boss.
Three players are supported simultaneously. They can either choose to play the game cooperatively or against one another in the battle mode. The characters that are not Bruce Lee will not be playable. Therefore, additional players will use Bruce Lee clones that are differentiated with different trouser colors.
UPC: 0-21481-62042-6
Platform: SNES
Players: 1-3
Condition: Used
Genre: Fighting
Region: NTSC (North America)
Rating: Teen 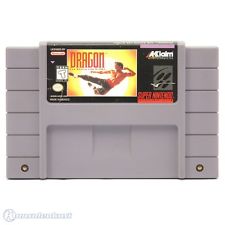