Pit Fighter SNES Game Cartridge
Pit-Fighter was released for the SNES in 1991. It was developed and published by Atari Games. It was originally released in the arcades in 1990. The game is noted for using live actors that were digitized earlier than most games. The characters’ graphic animation in the game were created using a process involving a blue screen. The variety of character moves and poses in this process were performed by actors that were hired and were recorded on camera. The character animation on the game screen are actual footage replays and not a redrawn, or rotoscoped, animation that was common in the other fighting games. The first game that used digitized sprites was Reikai Doshi: Chinese Exorcist by Home Data.
Pit Fighter for the SNES has three playable characters and five unplayable characters compared to the arcade’s eight unplayable characters. The three unplayable characters the SNES lacks are Southside Jim who was played by James Thompson, &nbsp;Heavy Metal who was played by Kim Rhodes, and Mad Miles who was played by McGowan. The three playable characters the player can select from are Buzz, a strong and big ex wrestler, Ty, a kickboxing champion who is agile, and Kato, who is a 3rd degree black belt that is quick. These characters were played by Bill Chase, Marc Williams, and Glenn Fratticelli, respectively.
Some of the five unplayable characters will share their name with the actor that played them. The first is Executioner, who is played by John Aguire. The second is Angel, who is played by Angela Stellato. The third is C.C. Rider, who is played by Rich Vargas. The fourth is Chainman Eddie, who is played by Eddie Venancio. The fifth is Masked Warrior, who is played by Bill McAleenan.
The gameplay for Pit Fighter will be similar to Violence Fight by Taito and Street Smart by SNK. The player will be able to kick, punch, and jump and will need to attack their opponent until their energy is out. A super move can be performed when the three main buttons are pressed simultaneously. The three characters the player will select from will all be different in power and speed and will also have different moves.
Every three fights there will be the bonus round called Grudge Match. During this bonus round, the player will need to fight a clone of the fighter they are currently using during a single player game. If playing with more than one player, it will be the other human players. If a fighter is knocked out three times during this round, that fighter will be eliminated. The last fighter standing will be the winner. Losing this match will not have a player eliminated, but whoever wins will receive bonus money. The SNES version will lack interacting with the audience and using weapons.
The final fight, which is the Championship Match, will be between a player and Masked Warrior, the entity of mystery that will taunt a player between the matches every now and then. If there are multiple players playing and get to the final fight, they will need to fight one another to death until one player becomes the victor and will then fight Masked Warrior.
UPC: 7-19575-03001-4
Platform: SNES
Players: 1-3
Condition: Used
Genre: Fighting
Region: NTSC (North America)
Rating: Mature 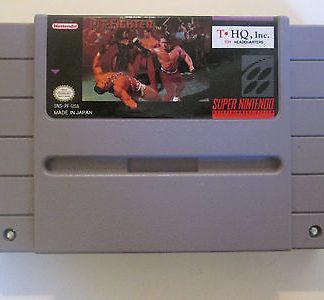