Urban Champion NES Game Cartridge
Urban Champion was released for the NES in 1986. It was developed and published by Nintendo. The game’s inspiration came from the 1984 Boxing title from Game &amp; Watch, which is known also as Punch-Out!!. Urban Champion became the first 2D fighting game Nintendo created. It was followed eventually by Joy Mech Fight which was released in 1993 but was exclusive to Japan.
The game’s main purpose was to knock another player into the sewer manhole. The time limit was set to 99 seconds and there was also a stamina limit for the player that was set to 200. There are two attack types, which are heavy punch and light punch. Heavy punches will send opponents backwards, but these punches are easily blocked and will take a longer time to able to pull one off.
Every fight, a player will begin with 200 units of stamina. For each punch thrown, the player will lose a single stamina unit. There will be flower pots that will be dropped from the windows occasionally. If one of these pots hits a player, they will become dazed and lose 5 units of stamina. A player will advance onto another street once they are hit off the current pavement. The game’s goal, however, is to achieve the Champion rank. Every time three fights are completed, the player will receive a certain symbol on the screen’s lower right area. Once five symbols are earned, the player will start another set of symbols. Once 45 total symbols, which is 145 fights, have been achieved, the player will receive the Champion rank.
A policeman may pass in a car during any point while in a fight, causing players to go back to the starting positions. Whenever the time hits zero, a police officer will end up arresting the player that is the closest to getting knocked off, making it a win by default for the player that was not arrested that round. Neither fighter will have a name and will be just a swap of palette from the character the player is using. There is also no scoring system within the game.
UPC: 0-45496-63018-8
Platform: NES
Players: 1-2
Conition: Used
Genre: Fighting
Region: NTSC (North America)
Rating: Everyone 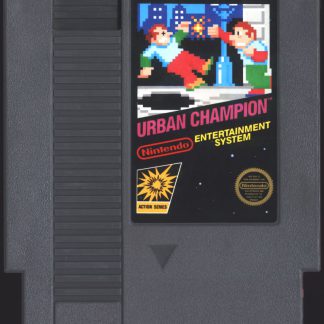