Bubble Bobble NES Game Cartridge
Bubble Bobble was released for the NES in 1988. It was originally an arcade game released in 1986. The game stars the twins Bob and Bub, who are Bubble Dragons. The player will be tasked to complete 100 stages while bursting and blowing bubbles, jumping off and on blown up bubbles to search the level’s obstacles, and eliminating and dodging enemies. The main object is trying to rescue Bob and Bub’s girlfriends that were captured by the Cave of Monsters. This game is an example one of the early action games that have multiple endings. The ending will depend on how the player performs and how many secrets the player discovers. The game has become extremely popular, leading to a series of many spin offs and sequels.
The player will control either Bob or Bub with the ability to travel across platforms, fall onto ones beneath, and jump over gaps and onto higher platforms. Every level will have one screen without any scrolling. If there are any gaps at the bottom edge, the player can fall into them and reappear in the top. Each level also has a specific amount of enemies the player will need to defeat to advance to the next stage. Bubbles will need to be blown to trap enemies and then burst the bubbles by running into them. Every enemy that is defeated with bubbles will turn into food items the player can pick up to get extra points. Destroying multiple enemies simultaneously will award higher scores, then causing more valuable foods to appear. All the bubbles for a specific time will float until they burst by themselves. The player can jump onto these to ride them into inaccessible areas.
There will be various items the player can collect, including some carrying significant bonuses and power ups. An example are some of the wrapped candies will allow Bob and Bub faster moving and be able to blow bubbles greater distances. Other items like umbrellas will allow the player to skip multiple levels to get closer to the last level. Magical items will also appear every now and then to grant the player advantages and special abilities when they are picked up. Ocassionally, a special bubble will appear that the player can burst and it will attack the enemies with lightning, water, or fire. If the player collects bubbles that are letters to spell EXTEND, they will earn an extra life and will immediately be advanced to the following level.
A life is lost when the player touches any enemies or projectiles like bottles, lasers, fireballs, and rocks. Enemies will become angry if they are able to escape a bubble when they are left inside one too long of if the player takes a lot of time during the current level. This will turn the enemy pink and be able to move faster. They turn back to normal once a life is lost. When a time limit that is further expires, an extra enemy that is invincible will appear for every player in the game. It will then actively chase them with only horizontal and vertical movements. They will disappear when the current level is completed or when the player has a life lost. When one enemy is left, it will immediately become angry and will remain angry until the player defeats it.
In the last stage, which is level 100, the player will fight a boss. When completing level 100 with one player, it will reveal a message saying the game was not truly been ended and will hint the player to come there with their friend. When the game is completed with two players, they will see the Happy End, which will show the brothers transform into human form and reunite with both of their girlfriends. The ending will also include a code the player will need to decipher. Once figured out, the player can enter the code to play the game in Super mode, which is more difficult and faster. If the harder mode is finished with two people, there is a second Happy End that will be displayed. This ending will reveal that Super Drunk are the parents of the brothers that were being controlled by an outside influence. Both brothers will return normal and get reunited with their girlfriends and parents.
UPC: 0-20588-01006-2
Platform: NES
Players: 1-2
Condition: Used
Genre: Platformer
Region: NTSC (North America)
Rating: Everyone 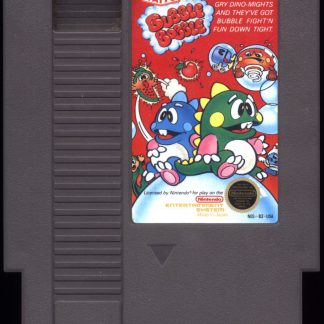